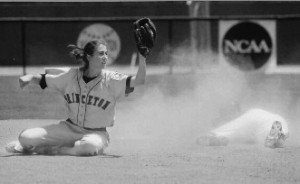 “On the Future of Princeton Athletics”

I would be loath to accept the recent PAW article, “What Price Victory?” written by Doug Lederman ‘84 for the December 17, 2003 issue and featuring an interview with former Princeton president William G. Bowen, as the final, let alone definitive, statement on the discussion of athletics at Princeton. When I look into the mirror that Lederman and Bowen hold up to the Princeton student-athlete, I do not see my own reflection. And if I cannot be seen, then I feel I should be heard.

I was a recruited four-year starter on the varsity Softball team and an English major utterly devoted to the study of literature (currently in the final stages of a Ph.D. in English at Emory University in Atlanta, where I am teaching and writing a dissertation on twentieth-century British and Irish war poetry, I am utterly devoted still). But my own experience as a student-athlete at Princeton differs so entirely from the narrative being constructed by a select (though loud and insistent) few, that I must ask a few questions about the politics of such a “debate”—a word I place in quotation marks since it, erroneously in this case, implies that there are in fact at least two sides being argued.

Who is—and who should be—at the center of the debate about the future of Princeton athletics? Read collectively, the recent flurry of publications criticizing Princeton athletes reads more like a small coterie’s obsession than a collective search for the truths of a many-sided issue affecting an entire University community. How many stories like my own have been written out of—or have not yet been written into—the story of “the Princeton student-athlete”? To dismiss our stories as mere exceptions and rare anomalies sprinkled ever so infrequently here and there is not only reductionist but also irresponsible. Princeton clearly has on its horizon several important decisions to make about the role of athletics. Yet the future of Princeton’s athletic programs is too important an issue to let those who would will a thing to be so, simply have their way because they are the loudest in the crowd.

Although we have recently read in the PAW of Princeton student-athletes who are “too focused on their sports” and who exhibit behavior that “borders on single-mindedness,” I was, in spite of my commitments to my academic work and my sport, able to find the time to contribute to the University community in other ways. I sang with my non-athlete roommate at Princeton AIDS Awareness Coffeehouse shows in the basement of Murray-Dodge. I served as an Eating Concerns Peer Educator through the McCosh Health Center. And I was President of the Princeton Varsity Student-Athlete Advisory Committee, which strove to combat the very stereotypes that a few would now spoon-feed to the Princeton alumni community at large. Would those who have written unfavorably about Princeton athletes be surprised to know that I, a varsity athlete, lived with eight women, none of whom were my teammates? That I, a varsity athlete, joined an eating club because I loved the people I met there, not because my teammates were joining too? That I, a varsity athlete, didn’t need to skim all of my reading assignments in order to get them done? That our coach let us skip practice if we really wanted to attend an afternoon lecture in our department or if we needed extra time for an upcoming test or paper? That one of my favorite memories at Princeton will always be a moment in my senior year when, after stealing second base in a home game, I glanced up into the stands while dusting off my uniform and saw my bespectacled thesis advisor cheering uproariously with the rest of the fans in the bleachers?

Being forced to work on a highly competitive team, I learned how to respect what I could not understand, how to work productively with someone with whom I would otherwise not necessarily choose to spend all that much time. I knew what it felt like to walk, exhausted, back up the hill after practice, to grab a cup of coffee (Small World, always) and head back to my carrel in Firestone Library with an indescribable sense of self-efficacy and accomplishment. In recent PAW articles, we have read of student-athletes who are too physically tired to do their work, but what of those of us who found that physical exertion led to clarity of thought? (To this day I keep my running sneakers next to my office desk and go out for a jog to clear my head for a long evening of dissertation writing.) In “Why the Novel Matters” (1936), D.H. Lawrence famously began: “We have curious ideas of ourselves. We think of ourselves as a body with a spirit in it, or a body with a soul in it, or a body with a mind in it. Mens sana in corpore sano.” Lawrence loved his Latin. The phrase means: A sound mind in a sound body. May Princeton ever attend to this as one of its central mottos.

Was I tired after a game or a practice? Of course. Too tired to do my studies? Once in a while. Did I ask myself from time to time if the sacrifices I was making to play a varsity sport were worth it? Naturally. But doing anything exceptional is never easy. If it were, says my ever-wise mother, everybody would be doing it. And the lessons I learned by balancing a sport and my studies at one of the finest universities in the country were invaluable. They became an inextricable part of the me who ventured forth into life after Princeton.

And isn’t this the whole point? One needs only look around at reunions to see how widely Princeton alums acknowledge, year after year (and for the rest of their lives), the formative nature of their four short years at Princeton. I would argue that Princeton’s lively and thriving culture of the well-rounded and holistic education is what separates it from other elite institutions. I don’t know exactly what Lederman’s and Bowen’s Princeton would look like, but it doesn’t sound like a place where I’d want to be.

And so to end with a brief anecdote. In 1995, the Princeton Softball Team became the first (and is to this day the only) Ivy League team to play in the “Final 8” NCAA Division-I Women’s College World Series in Oklahoma City. It being the end of May, we were in exam period, and since we had a few hours to spare between games, a bunch of us took out our books and studied there in the stands. After a while, several athletes from a Division-I national softball powerhouse, already weeks into their summer break, sauntered casually behind and stopped to look at us. After a second or two, I heard one of them mutter to her teammates, “Look at the Princeton nerds with their noses in the books.” I looked around at my teammates studying in uniform, their caps curled down over faces bent towards organic chemistry textbooks and Dostoevsky. And I must say, never before in all my life was I so proud to have been called a “nerd.”

My great wish is that Princeton decides to devote more of its energy towards soliciting and showcasing more sides of the story than one, that this be merely the beginning of the debate about the future of Princeton athletics, not the end.