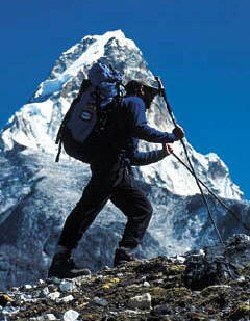 Erik Weihenmayer, who overcame the loss of his sight early in life to become one of the foremost mountain climbers in the world, spoke on the Princeton University campus Wednesday, Nov. 16, as part of the Princeton Varsity Club Jake McCandless ’51 Speaker Series. Weihenmayer’s talk was held in Richardson Auditorium.

Weihenmayer became the first blind person to climb the world’s highest mountain when he reached the summit of Mt. Everest on May 25, 2001. He has also reached the peaks of the “Seven Summits,” making him one of approximately 100 people who have ever climbed the highest mountain on each of the seven continents. Born with retinoschesis, which gradually causes the retina to deteriorate, Weihenmayer had partial sight through his childhood before losing his vision completely at age 13. Now 37, Weihenmayer has spent the time since losing his sight compiling an extraordinary record of achievement.

He has been a successful wrestler, a wrestling coach and a teacher. He works for the American Foundation for the Blind on its national literacy campaign. He has hiked the Inca Trail, a 60-mile path through the Andes in Peru. In addition, he has published a book about his life’s experiences entitled “Touch the Top of the World” and has produced a documentary entitled “Farther Than the Eye Can See” about his trip to the Everest summit. Since his Everest summit, Weihenmayer has also taught climbing skills to blind Tibetan teenagers and led a group of six of them to a 21,000-foot peak on a glacier on the north side of Everest. He has been featured on numerous television news and talk shows and serves as a motivational speaker. The list of his awards and honors is nearly endless, including an appearance on the June 18, 2001, cover of Time magazine.

He is also a marathon runner, skydiver, long-distance cyclist, rock-climber, ice climber and skier. He and his father Ed, a 1962 Princeton graduate and a fighter pilot during the Vietnam War, biked from Hanoi to Ho Chi Minh City, Vietnam, with 75 others, most of whom were veterans of the war. Weihenmayer has also competed in and completed the Primal Quest, a grueling challenge in which teams of four compete on a 360-mile course through forests and rivers and over mountains to reach a series of checkpoints in order. The teams compete night and day, often averaging as little as two hours of sleep per night, to run, hike, swim, paddle and climb their way through the course. Teammates must stay with 100 yards of each other during the entire event, in which Weihenmayer’s team was one of 44 of the 80 entrants to finish.

The Jake McCandless ’51 PVC Speaker Series was endowed in the name of J. L. “Jake” McCandless ’51, who coached Princeton to the 1969 Ivy League football championship during the Tigers’ centennial year of football.
Previous: Kathy DeBoer
Next: PVC On the Road in Washington DC.