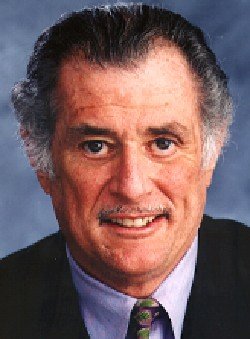 The Princeton Varsity Club was pleased to welcome Frank Deford ’61 back to campus on Tuesday, April 24th as part of the Jake McCandless ’51 PVC Speaker Series. Deford presented his lecture, “Sports: The Hype and the Hoopla” at Richardson Auditorium on the campus of Princeton University.

Author and commentator, Frank Deford is among the most versatile of American writers.  His work has appeared in virtually every medium. The author of fifteen books, his newest, The Enitled, a novel about celebrity, sex and baseball, will be published in May.

On radio, Deford may be heard as a commentator every Wednesday on Morning Edition on National Public Radio and, on television, he is a regular correspondent on the HBO show, RealSports With Bryant Gumbel.  In magazines, he is Senior Contributing Writer at Sports Illustrated.

Moreover, two of Deford’s books — the novel, Everybody’s All-American,and Alex: The Life Of A Child, his memoir about his daughter who died of cystic fibrosis — have been made into movies.  Another of his books,Casey On The Loose, is being turned into a Broadway musical.  Cathy Schulman, producer of 2005’s Best Picture, Crash, is producing Deford’s next film, a comedy, The Sister-in-Law.

Deford has also been presented with the National Magazine Award for profiles, a Christopher Award, and journalism Honor Awards from the University of Missouri and Northeastern University, and he has received many honorary degrees.  The Sporting News has described Deford as “the most influential sports voice among members of the print media,” and the magazine GQ  has called him, simply, “the world’s greatest sportswriter.”  In broadcast, Deford has won both an Emmy and a George Foster Peabody Award.  ESPN presented a television biography of Deford’s life and work, You Write Better Than You Play.  A popular lecturer, Deford has spoken at more than a hundred colleges, as well as at forums, conventions and on cruise ships around the world.

For sixteen years, Deford served as national chairman of the Cystic Fibrosis Foundation, and he remains chairmanemeritus.  He resides in Westport, Connecticut with his wife, Carol.  They have two grown children — a son, Christian, and a daughter, Scarlet.  A native of Baltimore, Deford is a graduate of Princeton University, where he has taught in American Studies.