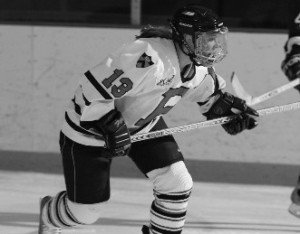 It’s taught me a lot of things, but the very first lesson I learned was modesty. Being naive, I thought that it wouldn’t be much different at Princeton. I remember those first few weeks when I thought I was a hot ticket because I was a freshman on the first line. I guess I didn’t quite realize that I couldn’t just expect to be there in the starting lineup, I had to earn it and deserve it. There were girls on the team bigger than me, stronger than me, more experienced than me, and better conditioned than I was. I learned modesty, I learned I had to earn a starting spot on the team and I learned I had to work to be the best, and even then, there might be someone who is better.

I learned [the importance] of striving for success. Whether it be to win, for excellence, or to improve yourself and others, athletics has taught each of us to strive for many things. It is an honorable occupation to practice, practice and then continue to practice over and over again in order to become the best that you can be.

Athletics teaches you to keep striving, to not take no for an answer. It teaches you to push yourself outside your comfort zone, to try to so hard at something, that when you think you have given it your all and the sweat is pouring down your face and stinging in your eyes, you find a way to dig deeper and keep going.

The most important lesson that I can say, without a doubt, is perseverance. Princeton isn’t easy. It isn’t easy athletically, and it certainly isn’t easy academically. It would have been so easy to have gone somewhere with a better team, or with more athletic funding, or with scholarships. We didn’t though. We came to Princeton. And it would have been so easy to just throw in the towel. To say, ‘This is just too much.’ But we didn’t. We battled through and we persevered.