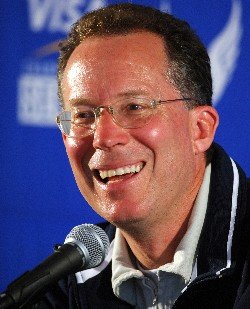 The Princeton Varsity Club was pleased to welcome Craig Masback ’77 back to campus as part of the Jake McCandless ’51 PVC Speaker Series. Masback presented his lecture, “The Enduring Values of Sports – Facing Up to the Challenges of the 21st Century” on Thursday April 17th in Dodds Auditorium.

From 1997 through 2007, Masback was the CEO of the Indianapolis-based USA Track & Field (USATF), the national governing body for track and field, long distance running, and race walking. Masback was responsible for overseeing programs ranging from youth track and field, to selecting teams to represent the United States at the Olympic Games and World Championships, to administering programs for age 40+ masters runners.  Under Masback, Team USA increased its medal production at Olympic and World Championship events by over 50% and USATF more than doubled its organizational revenues and quadrupled sponsor revenues, launching the VISA Championship Series (VCS), ten elite track meets featuring the world’s best athletes with coverage on NBC, CBS, and ESPN. VCS events and the Olympic Track & Field Trials have featured blue chip sponsors such as Hershey’s, General Motors, Xerox, and AT&T, record crowds, and growing TV ratings, including a sell-out of 23,000 spectators a day for eight days at the Olympic Trials, the largest turnout in the 113-year history of the Penn Relays (more than 114,000 spectators), and a 30% increase in TV ratings for the 2006-2007 seasons.

Prior to working at USATF, Masback was a senior associate at Wilmer, Cutler & Pickering (now WilmerHale), a Washington, D.C., law firm, specializing in communications and sports law. Masback was a track and field commentator for NBC at the Barcelona and Atlanta Olympic Games and provided network television commentary for numerous other track and field events for NBC, CBS, ESPN, and ABC over a 15-year broadcast career. Masback was a co-founder of Inclyne Sports, a sports marketing and sports television production company with offices in New York and California. From 1982 through 1984, he worked for the International Olympic Committee in Lausanne, Switzerland.

The 1980 U.S. indoor mile champion and former American record holder at 2,000 meters, Masback’s 1979 clocking of a 3:52.02 mile, one of his 30 sub-four-minute miles, ranked him as history’s sixth fastest miler at that time. His first sub-four-minute mile was run at the Iffley Road track in Oxford, England, where he was the second man to break the magical barrier. Twenty-four years earlier, on the same track, Roger Bannister’s legendary run shattered the four-minute barrier for the first time in history.

Masback is a graduate of Princeton University and Yale Law School. He also attended Trinity College/Oxford University from 1977-79 on a Keasbey Foundation Fellowship and was a recipient of an NCAA postgraduate scholarship. Masback and his wife, Sarah, have a daughter, Grace, and a son, Britton.