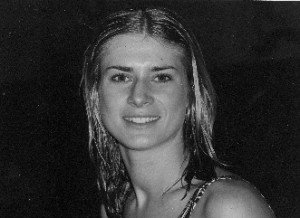 Against the backdrop of the turbulent events of the late 1960’s, Princeton University announced its intention to admit women. Although the decision was controversial, it placed Princeton at the forefront of a movement to provide equal opportunity for women in our society. When I entered Princeton in the fall of 1970 I was 17 years old and keenly aware that the women attending the University were tradition breakers. I felt fortunate to be able to receive a Princeton education; however I did not expect the University to also offer women an athletic program.

Participation in sports was not encouraged in young girls of my generation. Only a handful competed on private club teams and even fewer on school teams. Generally, interscholastic and intercollegiate sports programs for women did not exist, and therefore most of us had limited team experience. In addition, the prevailing wisdom regarding those of us who were competing was “girls peak” athletically at around 15, 16 or 17 years of age.

The truth is that I was an Olympian before I was a Princetonian. In 1968, at the age of 15, I was considered to be at my peak with regard to athletic performance and soon to be “over the hill”. When Princeton committed to developing an athletic program for women, I was given an opportunity to compete past what was previously considered my prime. Certainly, I did not expect to become faster and stronger with age; however, that is exactly what happened.

Many of us were eager to explore our potential through an extended swimming career. With the University’s support, Jane Fremon began training with the men and competing unofficially in their meets. I joined her in the fall of 1971 with an eye on the 1972 Olympic Trials. Cece Herron was diving. We might have been the first women to train in Dillon Pool, but in my memory Carol Brown was the driving force behind organizing a women’ swimming team. Her enthusiasm was contagious and we became excited about the possibility. We enlisted the support of Merrily Dean, who arranged coaching, set up a limited meet schedule, and found smelly old sweats for us to wear. With everything we needed, we were off to the races!

If not for Princeton’s bold commitment to women’s sports during uncertain, changing times, I would have never had the opportunity to become an NCAA champion, win gold and silver at the World University Games, or be part of an American and NCAA record-breaking 200yd freestyle relay team (Hi Jane, Carol and Barb!) Actually, I don’t think I would have realized my full potential as an athlete at all. As a team, we swam fast, but more importantly we had a lot of laughs. We remain connected to each other and to a tradition that is 35 years young. Feels good. Thank you, Princeton.