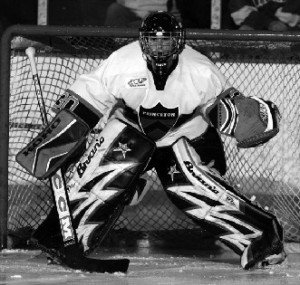 Excerpts from his acceptance speech of the 2006 Hockey Humanitarian Award

“…Reflect for a moment on a person or event that has made a difference in your life. In my case, I can think of none more important than my parents and their unwavering support. I remember the decision to play goal – and the hefty price tag associated with goalie gear, the hundreds of miles of driving, the flashing red goal light that calls attention to every mistake… Oh, and that red light flashed! But no matter what, my parents respected, supported and encouraged this passion with back yard rinks and Band-Aids for the blisters.”

“Additionally, there are at least two other people without whom I wouldn’t be here with you. In junior hockey I had a goalie coach, Dave Rook, who not only taught me to play hockey, but who – as a young father – taught me to keep the game in perspective. And in college, the inseparability of being a hockey player and a role model was personified in our coach Guy Gadowsky. When I told him that I’d spend the entire summer volunteering in sub-Saharan Africa, where there would be no bench press, no squat rack, and certainly no ice, he didn’t say ‘where will you skate?’ he encouraged the decision. He shook my hand, wished me well and told me to be ready for a great senior year.”

“Looking around the league, at other players and teams, community service and NCAA hockey go hand in hand. Hockey players are citizens and I want to thank the coaches, the league and the humanitarian foundation for recognizing this.”

“…Collegiate athletics brings together people and communities. The stakes are huge. So to prepare us for this pressure and to bring out the best in us, coaches, in pre-game speeches, sometimes ask who will be the ‘difference-maker.’ The response to this question is nearly universal: silent nodding of the head. In this silent nod, I bet everyone says to him or herself: ‘I will be. I will score the winning goal, I will make the big save, I will be an inspiring coach, I will make a difference.’ And you will. You probably already have. I would like this question to be asked of everyone, every athlete, parent, student, or friend. Who will make a difference?”

“A smiling kid in the stands hoping for an autograph, or a starving person hoping for a meal, or a shy kid in the park hoping to find a friend to play catch with, or a mourning widow whose husband died of AIDS. It doesn’t matter whether you’re with a family half way around the world or with the guy around the corner, you have the opportunity to make a difference and a little deed can go a long, long way.”

“As hockey players, we’ve all shredded through the ice at 6 a.m., leaving it snowy and scarred. Then, exhausted, we can admire our artwork in satisfaction. But it’s only a few minutes before that masterpiece gets erased, replaced by a fresh sheet.”

“Similarly, after four years, college hockey ends, the overtime winner you scored can live as a cherished memory – but the ice gets cleaned. However, to that kid in the stands that you took the time to talk with or to that widow whose hand you held – your influence is never erased. You can make a lasting difference in someone’s life if you recognize just how big an impact a seemingly small deed can have. So, as your coach’s question still rings true: who will be the difference-maker?”