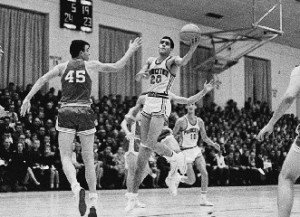 I’m occasionally asked by coaches to help out with recruiting, and when I am, I generally point to the team pictures on my wall and discuss the career achievements of my teammates with prospective students. For you see, what you have accomplished as Princeton student-athletes is only the beginning of the beginning. It’s what you accomplish in your respective careers as student-athlete-citizens that truly matters and reflects on your educational experience as an undergraduate in its totality: both the student part and the athlete part.

I’m proud of the athletics accomplishments of the teams that I played on, but prouder still of the career accomplishments of my teammates. One was a U.S. senator from New Jersey and ran for president. Another, an attorney, who ran unsuccessfully for governor in Florida. One is a college president; one has won every significant high-school teaching and coaching award in New Jersey. One is the president of the Boston Red Sox; another, now deceased, a college professor of ethnic studies; another a private school headmaster; and still another, a former treasurer of the World Bank.

I could go on (my other teammates also have been leaders in their respective fields), but you get the picture. I am listing their accomplishments to rivet your attention to what lies ahead, as well as to point out your obligation as student-athletes to fulfill your personal and career potential. Although your teammates will remain life-long friends, your Princeton athletics experience should not narrowly define you, but should be a springboard for future success. Just as you can’t live in the past, neither should you fear the future. Take heart from those student-athletes-citizens who have preceded you, for the examples I’ve highlighted — and even more contemporary survey data — strongly suggest that they have learned their lessons well in the classroom and on our playing fields.

Recently, Dan Friedman, a tennis player in the class of 2004, accessed the data used by Bill Bowen in writing his two books, “The Game of Life” and “Reclaiming the Game,” books that were critical of intercollegiate athletics at selective schools.

In doing the research for his senior thesis, Dan teased out the data for the Princeton athletics class of 1993. What Dan discovered is telling, compelling and contradicts the data interpretations made by Bowen. “Statistical analyses from the data set for the class of 1993 demonstrate that 40 percent of athletes go on to earn postgraduate degrees, compared to only 28 percent of non-athletes; that athletes have a 19 percent earnings advantage over non-athletes; and that athletes appear to be happier with their jobs and life in general.”

Why am I presenting you with this information? Because Bowen would have you believe that the Ivy Group and NESCAC schools pay an “opportunity cost” for admitting athletes at the expense of other qualified candidates. He is probably right if the goal of our respective institutions is to have more students who focus only on academics and are capable of getting straight A’s (ironically, an increasingly difficult objective at Princeton where grade “re-valuation” is the new academic policy — limiting A’s to about 35 percent of all grades).

I believe that the mission of our universities is to produce leaders who can advance both the best interests of our democracy and our society. Based on those criteria, the greater opportunity cost is associated with reducing the number of our athletes on campus who benefit from the holistic education achieved in our classrooms, on our playing fields, and in our social and cultural activities.

While the academic experience certainly disciplines the mind and enables us to acquire knowledge, the athletics experience teaches us the will to succeed, and does so in an environment that is simultaneously diverse and inclusive, an objective that is mostly theorized about in some segments of the academy. As my friend and classmate Jan Buck so eloquently stated in a letter to the Princeton Alumni Weekly nine years ago, “athletics provides the clinical microcosm of life necessary to put the abstraction of the academic aspect of education into perspective. In this way the truth that such an education claims to pursue can be palpably perceived rather than indulged in like an opiate. Athletics comes closest to the humanistic endpoint that higher education is all about.” Said another way, athletics, properly taught and implemented, is the sweatiest of the liberal and performing arts, an observation first made by former basketball player and alumnus Drew Hyland ’61, professor of philosophy at Trinity (Connecticut).

Well, I realize that I’m probably preaching to the choir, so let me repeat my opening message: I predict that — at your 25th reunion and beyond — when you point to the team pictures on your walls, you’ll take even greater pride in the career success of your teammates, in the contributions that you will make to society and to community, and that you will further the legacy of citizenship established by the student-athlete-citizens who have preceded you. In doing so, you will have justified the allocation of admissions slots currently made to athletes, you will have validated the treatment effects of the Princeton experience, an experience made all the richer by intercollegiate athletics competition, and you will have joined those other Princetonians — past, present and future — who have fulfilled through their actions our cherished motto of “In the Nation’s Service.”

Gary Walters ’67 is the Director of Athletics at Princeton University.