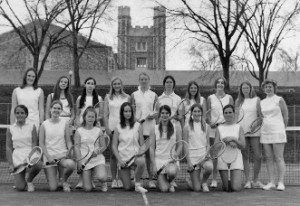 Being a member of both the first Princeton Women’s Tennis and Princeton Women’s Squash Teams provided me with unforgettable experiences. The women who were admitted during that time possessed an incredible array of talents and abilities. As the tennis-playing valedictorian of a large public high school in Wilmington, Delaware, I entered Princeton with the Class of 1974, the second year of coeducation, and received advanced standing and graduated with the Class of 1973. Female athletes at Princeton in the early 1970’s were truly pioneers. This period predated the recruitment of female athletes because no women’s varsity sports teams existed at Princeton. It was unchartered territory with many Ivy League universities going coed at the same time.

In the beginning, the Princeton administration was not sure about what to do with athletic women; and one of the first actions was to require us to take Phys Ed. Somehow, without permission, I avoided the first semester of Phys Ed by practicing with Bill Summers’ Freshmen Men’s Tennis Team every day. Later, I was rebuked by Merrily Dean and told that I had to be enrolled in a Phys Ed class. Unhappily, all five feet of me participated in a Winter volleyball class at Dillon Gym.

In the Winter of 1970, a small nucleus of us organized an effort which resulted in the creation of the first Women’s Tennis Team in the Spring of 1971. Many of us decided that playing on a varsity team was a good way to avoid Phys Ed. The university retained Eve Kraft, a well-known local Princeton tennis community organizer and founder of the Princeton Community Tennis Program, to be our coach. With the first group of players, the team primarily needed an organizer rather than a coach. The first year’s players included Marjory Gengler, a nationally ranked player from New York; Helena Novakova, a Czechoslovakian national junior champion; and powerful players from California.

The Women’s Squash Team was formed during the next school year by a group of players who had learned the game from scratch as converted tennis players in a Phys Ed class taught by the legendary Betty Constable, a five-time national squash champion. Back then, most women were introduced to squash for the first time in college because squash was not available to women at prep schools or at private clubs. Moreover, there were no public squash courts in the early 1970’s. Betty, whom we called Mrs. C during our playing days, made the game fun but was always a demanding task master. I still remember her repeated cajoling of the tennis converts to pretend that we were just “swatting a fly” when returning serve. As tennis players, we were not used to the confining walls and small courts, and we needed to make adjustments so that we did not slam into the walls. Learning how to play the angles and hit the ball off the back wall presented a challenge.

Squash practice was at Jadwin every day on the old courts. As with indoor tennis, the women had no locker room or shower in Jadwin and had to arrive dressed to play and then return to their dorms to shower and change. At first, the men were not used to divvying up the courts with the women; but quickly, cooperation between the teams was achieved.

The Women’s Squash Team’s records the first two years were very good, especially for new players. We made up for our lack of experience and late introduction to the game by our toughness, tenacity, and determination. Women at Princeton in the early 1970’s were used to overcoming the odds and succeeding. I will never forget making it to the finals of the Women’s Squash National Intercollegiate Championship during my first year of playing squash and meeting my teammate and high school classmate, Wendy Zaharko, in the finals. Wendy, our team’s secret weapon, was the exception to the rule of the female college squash novice and had played before arriving at Princeton. The local Princeton squash community immediately supported the Women’s Squash Team and turned out in force to watch our matches in Jadwin.

I remember being driven to away squash matches by Mrs. C in a long station wagon and hanging on while she tried to pay the toll and tear through the tollbooths before the green light flashed. Mrs. C was always a competitor and was luckily a lefty, which helped at the tollbooths. I also have fond memories of our first squash uniforms being white Princeton T-shirts and orange and black pom-pom socks, which had to be worn on the correct foot. The second year, the Squash Team had the same T-shirts but with large black felt letters proclaiming Women’s Varsity Squash on at least one quarter of the shirt. The Women’s Tennis Team never had any uniforms in those early days, and team members wore dainty white dresses for our matches.

My efforts to recruit Louise Gengler, my tennis teammate and dorm mate, to play squash were unsuccessful. Louise was concerned that squash would ruin her tennis so she played ice hockey instead. I will always remember the end-of-the-year team dinners for the Tennis Team at Eve Kraft’s house and for the Squash Team at Betty Constable’s house. Both teams provided camaraderie with a great group of women. Learning squash at Princeton from Betty Constable instilled a life-long love of the game. I was one of the Princeton Women’s Squash pioneers who went on after college to become a nationally ranked player and competed at a very high level for many years. We knew that if we could live up to Betty’s standards and just “swat the fly,” we could succeed at anything.

My years at Princeton as a varsity athlete on two teams provided a strong foundation for me to succeed as a trial attorney with the State of New Jersey. Understanding how to compete athletically has helped me to be a successful prosecutor and Certified Criminal Trial Attorney and civil litigator in a variety of areas including acting as lead counsel taking over three school districts in New Jersey. Being a successful varsity athlete at Princeton required efficient time management of competing priorities and was rewarding in every respect. I am very proud of and grateful for my participation on both of these teams and would not trade my experiences on them for anything.