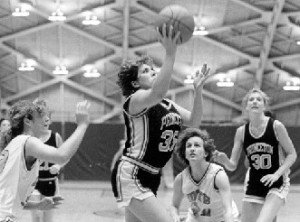 Basketball was always my passion. When it came time to decide where to go to college, I wasn’t concerned with academics – I was focused on finding a great basketball program that would offer me a scholarship. I was from a small high school so I knew I wouldn’t be heavily recruited, but I was still determined to get the attention of a UConn or Duke or Texas or Virginia…..a school with a women’s basketball history. I was my high school class valedictorian and my older sister had chosen Cornell, but despite my academic qualifications and her enthusiastic endorsements, I had no interest in pursuing an ivy league education because I didn’t feel the sports programs at Ivy league schools were top-tier.

Here comes the irony. Because I chose Princeton, not only did I get to play four more years of the game I loved (instead of sitting on the bench or being a role player for one of the schools I coveted), but I got to pursue a career in sports marketing that I never even knew existed when I was trying to decide where to go to school. It was “Princeton” on my resume that caught the eye of the NBA league office execs and led to an interview, an interview that turned into a job and then turned into a 15-year sports marketing career. I initially resisted attending Princeton because I didn’t think it was big-time enough to satisfy my basketball-driven passion, but it turned out that Princeton could do that for me and a whole lot more.

With the wisdom of hindsight, I can now say without a doubt that Princeton was the school for me. Attending Princeton gave me the opportunity to become the best basketball player that I could be. It was Princeton that showed me that terrific athletes and fierce competition are not exclusive to big-time college athletic programs. And it was Princeton that equipped me with the skills I needed to stay involved in the sport I loved even when my playing days were over.