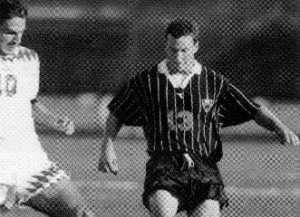 I felt as if I had been dropped onto a fast-moving treadmill. The pace of play was faster, the players bigger, and the skill level unquestionably superior to anything I’d encountered before. I probably spent more time in awe of the whirlwind play around me than asserting myself into the fray. As I struggled to adjust to the collegiate game, my hubris wore off and I realized I was not in high school anymore.

I feel confident that my initial athletic experience at Princeton has been shared by others throughout the years. The athletic adjustment, coupled to the other commitments of typical undergraduate life, most significantly the immense academic load, can make it a difficult transition. Despite some sacrifices, I enjoyed playing and I liked being part of the team. As I look back on a gratifying four years as a Tiger, I have begun to appreciate the other benefits of the athletic experience that I did not think about as a student.

Starting with that first team meeting and reinforced throughout my career, I learned about personal accountability, teamwork, friendship, and handling many different obligations. These lessons are particularly ingrained when forged in an environment in which a group must work and sacrifice together for a common goal.

I had the privilege and honor of representing my school at the highest level of intercollegiate competition and built great friendships along the way. I have now moved on to graduate school where I am doing laboratory research on heart muscle. There is not a day that goes by in which the perseverance, ability to manage various responsibilities, and work ethic honed at Princeton, on the playing field and in the classroom, does not stand me in good stead as I pursue my doctoral degree.

I have a daily reminder of my Princeton soccer roots as I pass an inscription with the Latin motto “Mens sana in corpore sano” (A sound mind in a sound body) on my way to the laboratory. This encapsulates my conception of the guiding principle for Princeton athletics. To me, the most impressive aspect of the Princeton athlete is his/her versatility in talents. Indeed, simultaneous mental and athletic practice accentuate the benefits of each, rather than detract from one or the other. Leave it to the Romans to eloquently and cogently say in 5 words what might take me 500!