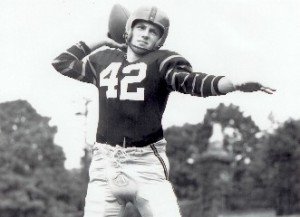 Excerpts from the acceptance speech of the 2007 Citizen-Athlete Award Winner: Dick Kazmaier ’52

When as a senior during the 1951 season the question from a reporter was, “what are your priorities as a football player at Princeton,” and the answer was, in order, friends, studies and football, minimally there was a degree of surprise. That being part of an almost unbelievable experience that had been unfolding in Palmer Stadium was not the peak consideration of a player’s college days was difficult at best for most sports page readers to comprehend. In the days when college football was king – and the Ivy League as it is today was becoming more than just a gleam in the eight Presidents’ eyes – it was hard for most to reason how a shared experience with a group of your peers that received so much national attention could be anything other than the ever present thought as one walked around the idyllic Princeton campus.

In the immediate post career preparation period – well, after the classrooms and the Navy – my approach to defining what was most meaningful about my athletic experience was to, in one way or another, portray my teammates and our shared experience as the example of collegiate sports participation at its best. Every so often there would be a dinner or event where the details of our team and its members and their emerging career, in whatever profession or business, would fully portray the values and benefits of an athletic experience as an undergraduate at Princeton.

As time went on, there were opportunities to project those values and benefits through communications and participation in organizations that cared about the proper blend of classroom and playing field so that hopefully neither one would be reduced in importance for those fortunate enough to include their sport as part of their campus life. In a way, it is unfortunate that organizations like the Knight Foundation Commission came into existence as symbols of the excesses of college sports that were overwhelming the educational mission that serves as a university’s foundation.

The Ivy League – to its great credit and to the efforts of its collective body of presidents – has maintained a balance that almost sport by sport has enabled competition to exist at the highest reasonable level for each sport – whether it be for an NCAA Championship or for an Ivy League title. Hopefully, their future efforts will continue to be as effective as academic programs change to respond to US and global issues and concerns and the temptation to diminish the benefit of being an athlete as well as a student is not allowed to prevail.

When you follow along and stand back to reflect, you realize that Princeton really has a magnificent athletic environment. There are competent and enlightened administrators, facilities that are first rate, coaches and staff that provide the best teaching and guidance and an overall atmosphere that is conducive to accomplishment and excellence in all respects. The best example of what the combination of academic and athletics can provide is right here on this campus – sport by sport – year after year!

Along the path of life, and particularly upon very special occasions, you are honored by those who accompany you. While there are many here at this celebration of the Class of ’07 athletic accomplishments whom I have not met personally, I believe there is a bond among the ages that results from the efforts and understandings of giving one’s all to play their role on their team the very best they can. This evening, with all the men and women of the great class of ’07, will remain a highlight of my life as a Princeton Tiger.

Previous: Collegians for the Cure ’08
Next: PVC Presents Reading With The Tigers