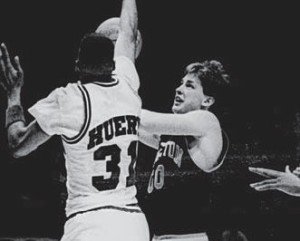 During my senior year of high school I stepped through a fish tank and caused relatively significant damage to my left leg. I was told there was a realistic possibility that I would not play basketball again. As schools consequently began to drop scholarship offers, the decision whether to attend Princeton became an easier one as my focus turned more towards academics. At the time I chose Princeton, I wasn’t certain that I would even be on the team. I had no way to foresee that I would experience three Ivy League Championships and play for one of the best coaches in the game. I also did not anticipate the profound effect this decision would have on my personal and professional life.

Freshman year was difficult. I quickly learned that a pre-med curriculum was not for me, and our team seemed to seek out ways to lose close games. These frustrations and failures were a harsh welcome to the realities of the world, as well as the realities of my own limitations. Coach Carril made certain that I was aware of those limitations. However, during my remaining 3 years we earned three bids to the NCAA Tournament. While the painfully close losses to Georgetown, Arkansas, and Villanova were excruciating, I will never forget the feeling of accomplishment and pride after winning the league title.

Playing for a legendary coach like Pete Carril was an amazing experience. His personality is larger than life, and his legacy is palpable at Princeton. He taught me to view the game differently, and pushed me to find ways to utilize my limited athletic ability. Many of his lessons about hard work, preparation, consistency, and patience are trademarks of Princeton basketball. Those lessons work well on the court and also have served many former Princeton basketball alums well in life. It remains a highlight of my visits back on campus to see Coach at a game, a practice, or at Conte’s.

Equally important to the life lessons learned during those years as a college athlete are the lasting relationships I developed with fellow hoops players and my college roommates. I am continually impressed by the quality, well-rounded group of people in the student-athlete body at Princeton. Not only are these people some of my closest friends, they are incredible resources who have done incredible things. Every job opportunity presented to me since college originated from a Princeton basketball alum. John Rogers, a hoops alum, introduced me to my first boss, counseled me in my career, and after two decades playing together in 3-on-3 basketball tournaments, remains a close friend. Todd Fredrick, another Princeton hoops player and one of my roommates, introduced me to my current job with a hedge fund and is a godfather to my children. I have been amazed by the role that Princeton basketball has played in shaping the last 20 years of my life, and am now grateful for the strange turn of events that lead me there.

Previous: Teams and Toys
Next: Weapons of Mass Construction 4