On Saturday, October 15th, the Princeton Men’s Soccer team took on two opponents at Roberts Stadium: the Columbia Lions, and Ataxia-Telangiectasia. A-T is a rare, degenerative disease affecting children as early as age two. Manny Sardinha ’12 learned about the disease during his junior year at Princeton, and decided to do something about it

Sardinha applied for and received PVC Service Circle grant funding, which allowed him to plan and implement a fundraiser around the game against Columbia (view photos from the event here). “This has been so exciting for me to see my idea finally come to fruition after a year and a half of planning,” Manny stated before the event. “I am so grateful for all the support I am getting from my teammates, coaches, faculty, PVC, A-T Children’s Project, and local families. It has truly been an amazing experience thus far.”

During warmups, the team wore commemorative t-shirts, which were then made available to game attendees via two options: they could purchase a shirt outright, or make a smaller donation for the opportunity to try a penalty kick against former Princeton Soccer standout Devin Muntz ’10 at halftime of the game to win a shirt. Nearly $2,000 was raised through the event, which will go directly to the A-T Children’s Project.

Ataxia-telangiectasia, or “A-T,” is a progressive, rare degenerative disease that affects a startling variety of body systems. It combined the symptoms of cerebral palsy, cystic fibrosis, muscular dystrophy, cancer, and immune deficiencies. Children who could once run and play, sing and talk, read and write, lose their motor skills one by one, are usually in wheelchairs by age ten, and often do not survive their teens. Scientists believe research on

ataxia-telangiectasia will help other more prevalent diseases such as Alzheimer’s, Parkinson’s, and cancer because of their similarities with A-T. 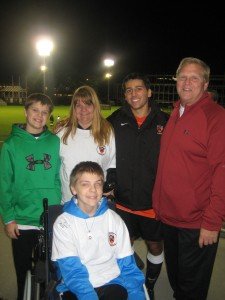 Sardinha hopes the giving doesnt stop here: “I hope that my fundraiser will inspire others to find it possible to organize simple fundraisers like mine that can have such a significant impact on children around the world. I believe that as a community, we can accomplish a whole lot and really help out the A-T Children’s Project.”

Manny recommends visiting the ATCP website, which features a video and a newsletter (subscribe;archive) that sparked his desire to affect change. You can also visit www.DereksDreams.com to learn about Derek DiGregorio (at left), a 13 year old boy who is currently battling the disease.

Portions of this piece used information from pre-event interviews with Manny by the Princeton Varsity Club (here) and the Princeton Office of Athletic Communications (here).