On Tuesday, December 11th, the PVC is proud to present University of Virginia Professor of English, Mark Edmundson, to campus. His presentation will examine the character building, and potentially character destroying, aspects of football and of sports in general.

Mark Edmundson is a University Professor in the English Department at the University of Virginia. His lecture is titled “Terrible Beauty: Football in America.”

Edmundson’s article, “Do Sports Build Character or Damage it?” was recently published in the Chronicle of Higher Education. You can read the article by clicking here. 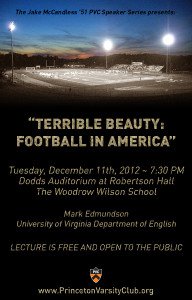 The event will be held at Dodds Auditorium at Robertson Hall on Tuesday, December 11th at 7:30 PM and is free and open to the public!

Prior to his appointment as University Professor, Edmundson held the NEH Distinguished Teaching Professorship for excellence in undergraduate teaching. At Virginia, he teaches courses in Shakespeare, Romantic Poetry and Modern Poetry.

Edmundson is the author of seven books, including “Teacher, the One who Made the Difference” (a New York Times Notable Book of the Year), “Why Read?” and “The Fine Wisdom and Perfect Teachings of the Kings of Rock and Roll.” His newest book–”Why Teach?”–will be published by Bloomsbury in the Fall of 2013. He has written essays about sports for The Chronicle of Higher Education and the American Scholar. He is now at work on a book about football to be called, “Be a Football Player! My Education in the Game.”

The Jake McCandless ’51 PVC series was endowed in the name of J. L. “Jake” McCandless ’51, who coached Princeton to the 1969 Ivy League football championship during the Tigers’ centennial year of football. The series strives to bring speakers to campus who will engage the Princeton community in topics that reflect the educational values inherent in the intercollegiate athletics experience.