Tigers in the Big Leagues: Education Through Athletics at its Finest 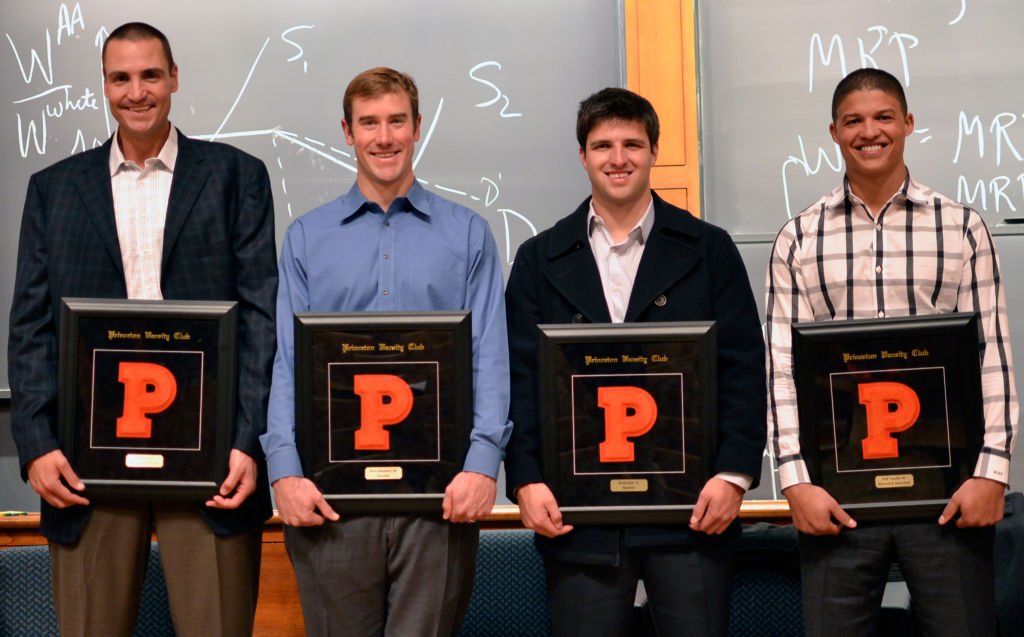 Chris Young ’02, Will Venable ’05, Ross Ohlendorf ’05 and David Hale ’11 excitedly returned to campus to participate in the Jake McCandless ’51 PVC Speaker Series. The talk was titled, “Tigers in the Big Leagues,” and the participants did not disappoint. They shared reflections on their respective Princeton student-athlete experiences, tales of tough big league match-ups, and what it felt like the first time they got the call up to the big leagues.

The day started with handshakes and hugs as the guys reunited in the lobby of the Nassau Inn. For some, it was a great opportunity to continue a friendship that was formed as undergraduates. Ohlendorf and Venable were Princeton teammates for years, and had the chance to cross over on campus with Chris Young ’02 for one year. Young and Venable played professionally together for the San Diego Padres, as did Ohlendorf and Venable for a year with the Padres. Though the three have never suited up on the same team at the same time, it was clear that they had great friendship, based on a true respect of one another.

For David Hale, the “rookie” of the group, he was formally meeting many of the others for the first time. Hale’s debut with the Braves has been widely reported; setting franchise records (striking out nine batters) and playing in front of his hometown crowd, which included nearly 300 friends and family members. The first batter he faced was Venable. Hale came out on top of the first meeting, striking out his fellow Tiger. Venable came roaring back, finishing the contest at 1-3 against Hale. But, the two had never officially met before yesterday morning. They shook hands, smiled and laughed together, as if they had known each other for years.

The first formal stop of the day was a luncheon with Princeton head coaches, athletic administrators and Academic-Athletic Fellows. Later in the evening, the group gathered again for a talk in McCosh 50 that was open to the public.  Both gatherings were emceed by Scott Bradley (Robert H.B. Baldwin ’42 Head Coach of Baseball) and the Ford Family Director of Athletics, Gary Walters ’67. The open forums allowed audience members to ask questions and engage in an interactive dialogue with each of the panelists.

Young spoke about his rookie year, and getting ready to take the mound for the first time, as part of his hometown team, the Texas Rangers. Like Hale, he had many family and friends in the stands for his debut. He recalled that it was eerily quiet when he took to the mound to warm up for the game and wondered why no one was encouraging him. It turned out that his pitching coach at the time, Orel Hershiser, had advised them earlier in the day the best thing they could do to help him with his nerves was to leave him alone. So, they did.

Later in his career, Young had the opportunity to play with Greg Maddux. Calling him a childhood hero, Young spoke about Maddux as not only an incredible player, but as the best pitching coach, and one of the best men, he had ever met in the game.

The business of baseball was also discussed, and all of the panelists noted that their Princeton education helped prepare them to handle contract negotiations, arbitration, and other difficult issues as part of their professional careers. Both Ohlendorf and Young have been heavily involved with the Major League Baseball Players Association. They spoke about the tough conversations that are taking place as it relates to drug-testing and performance enhancing drugs.

One common theme as part of the day was the true love and respect all four players have for their former coach, Scott Bradley. Venable appreciated Bradley’s professional approach to the game, and really responded to the atmosphere that was created in the Princeton dugout. A setting, he says, that helped to prepare him for his professional career. Dubbing Bradley as an “eternal optimist,” Young recounted phone calls from his former coach after tough outings. Instead of focusing on the negative, Bradley would tell him how terrific his curveball had been, and that if he kept that going that it would be a great season. Hale noted that Coach Bradley was a huge draw that helped bring him to Princeton. Describing himself as a player that put enough pressure on himself, he immediately synched with Bradley’s coaching style, which allows players space when needed. Ohlendorf described himself as very “raw” his freshman year and credited Coach Bradley for really helping to elevate his pitching during that formative time. He recalled hours and hours of training and called it the turning point in his pitching career.

There were also a lot of laughs as part of the informal session. When asked whether or not the three pitchers on the panel liked to have the opportunity to bat, Young took the opportunity to take a shot at Ohlendorf’s batting record. After laughing off the reference, Ohlendorf responded that while he wasn’t very good at batting, he actually really liked getting up to the plate. When asked about the players who they’ve had the hardest time with as part of their professional careers, Young laughed and listed a few batters; Albert Pujols, Ichiro Suzuki and Vladimir Guerrero. Joking that Vlad had “owned” him over the years; Young then posed the question to his fellow panelists. With his signature grin, Venable responded that Tim Lincecum was at the top of his list.

Each displayed a quiet humility. Not only while they were on stage and the audience was focused on them, but with every person whose paths they crossed. They were genuinely enthusiastic about speaking with the members of the University community, and thanked Gary Walters ’67 for his service to the Department of Athletics. Each spoke to what “Education Through Athletics” had meant to them, and how their experience as a Princeton student-athlete has not only shaped them, but prepared them for each of the ups and downs of playing a professional sport. Young stated that the theme of his career has been “perseverance,” certainly a test that every athlete has faced at one point in their career.

Outside of the luncheon and evening talk, Young and Venable also stopped by basketball practice to speak with Coach Henderson and the current team. As two sport standouts at Princeton, their basketball accomplishments and contributions have not been forgotten. Several questions throughout the day focused on how they navigated such a demanding academic institution, and excelled in two varsity sports. In an era of specialization, student-athletes like Venable and Young are almost impossible to find anymore, and you could feel a sense of the audience reminiscing along with them.

With a rich history of producing exceptional alumni, Princeton can count itself fortunate to include Young, Venable, Ohlendorf and Hale as part of that list. After all the formal questions were over in McCosh Hall, and the snow had stopped falling, Young, Venable, Ohlendorf and Hale stayed in the classroom for another hour to take photos, sign autographs and visit with the attendees. All with a smile on their faces.

Photo Gallery of Tigers in the Big Leagues

The Jake McCandless ’51 PVC Speaker Series was endowed in the name of J. L. “Jake” McCandless ’51, who coached Princeton to the 1969 Ivy League football championship during the Tigers’ centennial year of football. To learn more about the Princeton Varsity Club, click here.

Previous: The Jake McCandless ’51 PVC Speaker Series presents: Tigers in the Big Leagues. A Conversation with Chris Young ’02, Will Venable ’05, Ross Ohlendorf ’05 and David Hale ’11
Next: Student-Athletes Give Back During the Holiday Season