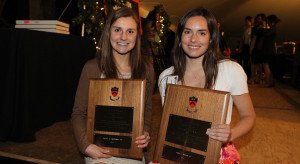 The 2014 recipients of the William Winston Roper Trophy (top male student-athlete), the C. Otto von Kienbusch Award (top female student-athlete), the Art Lane Award (selfless contributions to sport and society) and the Class of 1916 Cup (top senior GPA) were announced Thursday night at the 2014 Princeton Varsity Club Senior Banquet. Under the lights at picturesque Cleveland Tower, almost 650 members of the Princeton Athletics community gathered to celebrate the many accomplishments of the Class of 2014.

Click here to view photos of the 2014 PVC Awards Banquet.

The PVC Awards Banquet is the year-end, capstone event of the Princeton Varsity Club and celebrates the accomplishments of individual members of the Princeton Athletics community, including senior student-athletes, alumni, friends and staff, as well as the Class of 2014 as a whole.