The Princeton Varsity Club is pleased to announce Jason Garrett ’89 as the 2015 recipient of the Class of 1967 PVC Citizen-Athlete Award, which is presented by the Class of 1967 for selfless and noble contributions to sport and society. Garrett will be presented with the award on Thursday May 28th as part of the Gary Walters ’67 Princeton Varsity Club Awards Banquet. 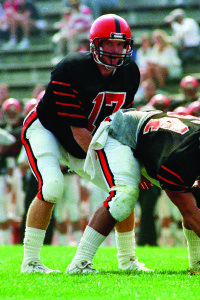 Jason Garrett was named the eighth head coach in Dallas Cowboys history on January 5, 2011. Garrett, who played for or worked alongside five of his predecessors, became the first former Dallas Cowboys player to become the team’s head coach. Having literally grown up around successful head coaches in the NFL and in the Dallas Cowboys family, Garrett was a member of three Super Bowl winning teams in the 1990s during his seven seasons as a Cowboys quarterback. His father, Jim, was a personnel scout for the team for 21 years and served under every Super Bowl winning head coach and ownership regime in franchise history.

As a player in Dallas, Garrett learned under championship coaches Jimmy Johnson and Barry Switzer, while serving as a back-up to Troy Aikman in offenses directed by Norv Turner and Ernie Zampese. He went on to play for the New York Giants who reached Super Bowl XXXV while playing for offensive coordinator Sean Payton. Garrett finished his playing days while studying under Jon Gruden in Tampa Bay and started his coaching career with the Miami Dolphins, where he worked under two-time collegiate national championship head coach, Nick Saban.

Garrett and his wife Brill (Princeton Class of 1988) founded their charitable foundation, Jason Garrett Starfish Charities, in 1997 with the goal of enriching the lives of young people. The principle activity of the foundation is a one-day football camp and leadership forum for high school athletes, which is held each summer at Princeton University in conjunction with Play It Smart, a program administered by the National Football Foundation.

Garrett also partners with many other organizations through his role with the Cowboys, including the Children’s Medical Center of Dallas, Make-A-Wish Foundation, and the North Texas Food Bank. He has continued the Jones Family’s longstanding passion for and commitment to the Salvation Army through the Angel Tree program, disaster relief efforts and the Reliant Home Run Derby. Garrett has also spearheaded “Cowboys U” – a one-day camp at the Cowboys training facility for underserved but deserving young student-athletes that involves the entire Cowboys roster and coaching staff who provide one-on-one football instruction and discuss the importance of off-the-field life skills.

As a senior at Princeton University in 1988, Garrett was named the Ivy League’s Player of the Year and honorable mention All American. He earned his degree in history in 1989, and moved on to the NFL as an undrafted rookie free agent with the New Orleans Saints developmental squad. After being released prior to the 1990 season, he spent the fall of 1990 as an assistant coach at Princeton. In 1991 Garrett moved on to play in the World League and the Canadian Football League before joining the Cowboys practice squad in 1992.Garrett and his wife Brill reside in Dallas, TX.

The PVC Awards Banquet is the year-end, capstone event of the Princeton Varsity Club and celebrates the accomplishments of individual members of the Princeton Athletics community, including alumni, student-athletes, friends, and staff, as well as the Class of 2015 as a whole. This year’s iteration will be held at the base of Cleveland Tower at Princeton’s Graduate College. In addition to the Class of 1967 PVC Citizen-Athlete Award, the Marvin Bressler Award, the C. Otto von Kienbusch Award, the William Winston Roper Trophy, the Art Lane ’34 Award, and the Class of 1916 Cup will also be awarded.

Those interested in attending the event, or learning more about the Princeton Varsity Club can visit www.PrincetonVarsityClub.org for more information.