Tara Christie Kinsey ’97 to be Awarded the Marvin Bressler Award

The Princeton Varsity Club is pleased to announce Tara Christie Kinsey ’97 as the 2015 recipient of the Marvin Bressler Award. The prestigious award is presented to a member of the Princeton family who, through heartfelt support of the University’s student-athletes and coaches, best embodies a belief in the lifelong lessons taught by competition and athletics as  complement to the overall educational mission. Kinsey will be formally presented the award on Thursday, May 28th as part of the Gary Walters ’67 Princeton Varsity Club Awards Banquet. 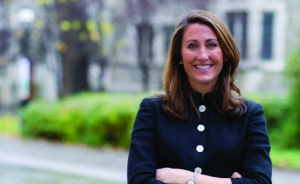 An Associate Dean in the Office of the Dean of the College and the Office of the Vice President for Campus Life, Kinsey works closely with student-athletes, coaches, administrators, and faculty members to empower student-athletes to realize their full potential. She has worked tirelessly to support all of Princeton’s 38 varsity athletic programs and is an Emeritus member of the Princeton Varsity Club Board of Directors. At the end of the 2015 academic year, Kinsey will be leaving Princeton to become the Head of School at The Hewitt School, an independent K-12 girls’ school in Manhattan.

Kinsey’s robust involvement with Princeton extends far beyond her commitment and support of Princeton Athletics. She established the Princeton Student Leadership Initiative, launched the Princeton Prospective Project, directed the Princeton Women’s Mentorship Program, and chaired the Advisory Committee on Women’s Leadership. Prior to her work as an Associate Dean, she was a member of the Office of Capital Giving, where she successfully managed a team of alumni capital giving volunteers in New York City and partnered with faculty, senior administrators, and the president to solicit a number of significant gifts for Princeton’s $1.88 billion Aspire campaign.

Kinsey has also served as a faculty advisor for Freshmen and Sophomores at Forbes Residential College and participated in the reviews of the LGBT Center, Carl A. Fields Center for Equality and Cultural Understanding, and the Women’s Center. She was a member of the search committees for the Executive Director for Career Services, the Director of Counseling and Psychological Services, and the Ford Family Director of Athletics.

A former 4-year starter on the Princeton varsity softball team, Tara batted .402 in 1996, one of only seven players to bat better than .400. She won the National Fast Pitch Coaches Association All-American Scholar Athlete Award and she still holds Princeton’s record for most stolen bases in a season.

She is married to Matthew Kinsey ’98, a civil engineering major and former member of the Princeton varsity men’s soccer team, and is the proud mother of two children, Sam (almost 8) and Charlotte (almost 6).

The Gary Walters ’67 PVC Awards Banquet is the year-end, capstone event of the Princeton Varsity Club and celebrates the accomplishments of individual members of the Princeton Athletics community, including alumni, student-athletes, friends, and staff, as well as the Class of 2015 as a whole. This year’s iteration will be held at the base of Cleveland Tower at Princeton’s Graduate College. In addition to the Marvin Bressler Award, the Class of 1967 PVC Citizen-Athlete Award, the C. Otto von Kienbusch Award, the William Winston Roper Trophy, the Art Lane ’34 Award, and the Class of 1916 Cup will also be awarded.

Those interested in attending the event, or learning more about the Princeton Varsity Club can visit www.PrincetonVarsityClub.org for more information.