“When The Game Ends: The Chuck Dibilio Story” 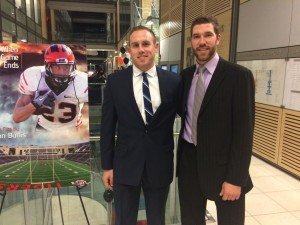 The Princeton University Department of Athletics, in conjunction with the Princeton Varsity Club and Princeton Football Association, held the premiere screening of “When The Game Ends: The Chuck Dibilio Story,” on Tuesday, January 5th.

The 35-minute documentary, produced by John Bullis, tells the story of former Princeton football player and current senior Chuck Dibilio, who in 2011 became the only true freshman in Ivy League history to rush for more than 1,000 yards and then had a stroke two months later.

Bullis uses a series of interviews with family, friends, teammates, coaches, medical personnel and others to trace Dibilio’s development as a football player, his meteoric freshman season, the stroke itself, his recovery, his quest to play football again and ultimately the events that have led him to the verge of graduating from Princeton.  The full documentary can be viewed HERE.

The screening was held in Taylor Auditorium in the Frick Chemistry Building before a capacity crowd that included Princeton student-athletes, faculty and staff, alumni and community partners. The evening kicked off with a reception and concluded with a Q&A session with Dibilio and Bullis following the screening.