The Princeton Varsity Club held its Winter Coaches Luncheon on February 2nd, where a selection of winter head coaches and accompanying student-athletes gathered to speak with university and community partners. 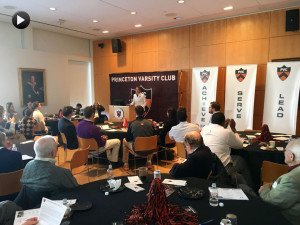 Additionally, student-athletes from each respective team were invited to speak to their Princeton expereince and the opportunities Princeton Athletics has afforded them to Achieve, Serve and Lead through athletic competition, in the classroom and beyond. Featured student-athletes included:

The luncheon also recognized two student-athletes who were awarded the PNC Achiever Award for the winter season, which acknowledges and recognizes achievement across academics, athletics and community service. Those winners included:

The PVC Spring Coaches Luncheon is scheduled for Tuesday April 12, 2016.