The Princeton Varsity Club held its Winter Coaches Luncheon on Tuesday, February 21st, where a selection of winter head coaches and accompanying student-athletes gathered to speak with university and community partners. 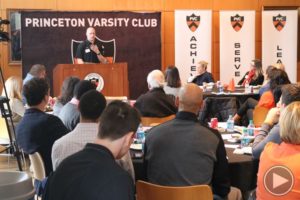 “You have to be courageous to play a sport…to put yourself out there, knowing you can lose. Hard work begets confidence, which begets courage, which empowers us and emboldens us to do the impossible.”  -Vanessa Smith ’17

The luncheon also recognized two student-athletes who were awarded the PNC Achiever Award for the winter season, which acknowledges and recognizes achievement across academics, athletics and community service. Those winners included:

The PVC Spring Coaches Luncheon is scheduled for Tuesday, April 25, 2017.