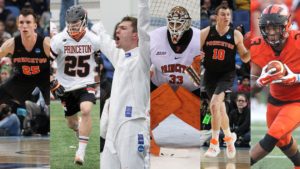 The Princeton University Department of Athletics has named six finalists for the William Winston Roper Trophy, given annually to the top senior male athlete.

Steven Cook
A first-team All-Ivy League honoree and the program’s first Academic All-America in 19 years, Steven Cook put together a senior season that helped Princeton reach the NCAA Tournament and win the Ivy League title for the first time in six years. Cook finished his career with 1,148 points, the 15th-highest total in program history, and he led Princeton with 13.6 points per game his senior year, when Princeton went 14-0 in the Ivy League season and then won the first Ivy League tournament. Among the highlights were his offensive rebound and put-back with 2.9 seconds left helped Princeton win at Harvard for the first time in seven years and his 30 points in the home win over Harvard to clinch a share of the championship.

Off the court, the economics major from Winnetka, Ill., earned a place on the Allstate NABC Good Works Team in recognition of his community service efforts, including fundraising for a Sudanese hospital and helping an anti-poverty organization in his native Chicago reorganize its business operations. With the Good Works Team, Cook earned a trip to the Final Four this year and was recognized on the court during the national semifinals.

Zach Currier
Zach Currier completed a storied career with one of the most amazing seasons in the history of Division I men’s lacrosse. Currier, a do-everything midfielder, finished his senior year with 58 points while also leading the team in caused turnovers and face-off winning percentage, not to mention coming within one of the school single-season record for ground balls. His 34 assists and 58 points led all Division I midfielders, and he had more points than the other 10 players with at least 100 ground balls combined. Currier finishes his career second all-time at Princeton in ground balls, 12th in assists, and 27th in points. His 58 points this year are the fourth-most ever by a Princeton middie.

Alex House
A four-time first-team All-Ivy League honoree and two-time All-America, Alex House finished 11th at the NCAA championships as a sophomore before placing fifth as a junior. House became just the sixth men’s fencer in program history to earn four first-team All-Ivy League honors and the fourth Tiger épée to do so. An English major from Upton, Mass., House twice earned Academic All-Ivy League recognition. House, a two-time captain, helped Princeton to Ivy League championships in each of the last two seasons, the program’s 15th and 16th Ivy League titles all-time. He has also represented the U.S. nationally and internationally.

Colton Phinney
Colton Phinney has been the backbone of the Princeton hockey team the last four years. A starter since freshman year, Phinney is the Princeton record holder in games played, surpassing Hobey Baker candidate Zane Kalemba. A member of the 2017 Mike Richter Award Watch List, Phinney set Princeton’s single-season saves record as a junior and became the Tigers’ all-time saves leader after Princeton defeated Colgate on home ice in an ECAC first-round series this past March. Topping a 34-year record, Phinney finished his collegiate career with 3,696 saves – the most by an active goalie in the NCAA, the third-most saves by a goalie in ECAC Hockey history and the eighth in NCAA history.

During his career he made 30+ saves in 73 games, with the most being 51 in a game against Harvard his sophomore year. A history major from Chatham, NJ, Phinney signed a two-way contract with the Winnipeg Jets in May.

Spencer Weisz
The first player in Princeton men’s basketball history to record 1,000 points, 500 rebounds, 300 assists and 200 3-pointers, Spencer Weisz was recognized as the 2017 Ivy League Player of the Year. His play helped lead Princeton to a 14-0 Ivy League season, the program’s first since 1998, a 19-game winning streak, the second-longest in program history, and the first-ever Ivy League tournament title.

Weisz ended his career as the program’s 12th-leading all-time scorer with 1,241 career points, fifth in 3-pointers made with 209, eighth in rebounds with 605, and second in assists with 383. The eighth player in Ivy League history to win both the Ivy League Rookie and Player of the Year honors during his career. Weisz, a history major from Florham Park, N.J., was a three-time All-Ivy League honoree.

Dorian Williams
Dorian Williams became the first Princeton football player in more than five decades to start on two Ivy League championship teams, and he capped his Tiger career with a first-team All-Ivy League performance as the leader of the Tigers’ dominant top-ranked defensive unit. The senior captain ended his final season with 55 tackles and two interceptions while leading Princeton to four straight victories in must-win games to claim the Ivy League title.

A sociology major from Streetsboro, Ohio, Williams was the starting nickel corner on Princeton’s 2013 Ivy championship team. During his four years as a starter, Princeton went 26-14 and never had a losing season. In the previous six years before he arrived, the Tigers posted a 19-41 record and never had a winning season. He won the Poe-Kazmaier Award, the Ronald A. Rogerson Award and the Pink Baker Award throughout his career.
The winner of the 2017 Roper Trophy will be announced at the Gary Walters ’67 Princeton Varsity Club Banquet June 1.