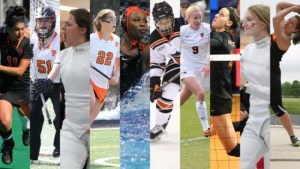 The Princeton University Department of Athletics has named 10 finalists for the C. Otto von Kienbusch Award, given to the outstanding senior female athlete.

Cat Caro
Cat Caro graduates after earning first-team All-America honors and leading Princeton to the 2016 NCAA Final Four. During her time at Princeton, Caro also helped lead Princeton field hockey to three Ivy League titles and four NCAA tournaments. As a senior she had career highs with 18 goals and 47 points – finishing eighth in the nation in goals and 13th in points. She was selected as the Ivy League Offensive Player of the Year and was named first-team All-Ivy and first-team All-America. Her standout performances include back-to-back hat tricks vs. Brown and Towson.

A two-time captain, the ecology and evolutionary biology major from Bridgewater, NJ finished her career with three All-Ivy and two All-Region honors.

Ellie DeGarmo
The 2016 Division I Goalkeeper of the Year, Ellie DeGarmo is a two-time Tewaaraton Top-25 nominee and two-time first-team All-America selection. DeGarmo was named 2017 Ivy League tournament MVP this year, setting records for saves in a game and in a tournament.

For the second consecutive year, DeGarmo is leading the nation in save percentage, and she entered the NCAA Tournament fourth in the country in saves per game. A Woodrow Wilson School major from Baltimore, DeGarmo set a Princeton record for saves in a season this past year with 235. She also is a two-time first-team All-Ivy selection.

Katharine Holmes
Kat Holmes, a 2016 U.S. Olympian, earned the fourth All-America honor of her career this past season as she finished second in an all-Tiger épée final at the NCAA Championships. With that finish, Holmes became the third épée fencer in Princeton women’s fencing history to earn four All-America honors, joining fellow Olympians Maya Lawrence ’02 and Susannah Scanlan ’14. Holmes earned All-Ivy League recognition all four of her years and was a first-team honoree three times, helping Princeton earn Ivy League titles every year in which she competed. As a senior, Holmes went 18-0 through the Ivy League round-robin, getting the decisive victory in a 14-13 win over Columbia that won the league championship for Princeton.

A psychology major from Washington, D.C., Holmes returned to the team this season after taking two years off from Princeton to pursue her Olympic dream, which she achieved with a place on the U.S. National team at the 2016 Games in Rio.

Olivia Hompe
Olivia Hompe, one of five finalists for the Tewaaraton Trophy as the outstanding player in college lacrosse, finished her career as the all-time leader at Princeton in goals (198) and points (285), more than any other women’s or men’s lacrosse player in Princeton history.

A two-time Tewaaraton nominee, Hompe was also a first-team All-America, a three-time unanimous first-team All-Ivy League selection and the 2017 Ivy League Attacker of the Year. She has been named to the Ivy League all-tournament team three times and was the MVP once, and she holds six tournament records. Hompe leads the nation in goals per game and is third in points per game this season, when she also set the Princeton single-season records for goals and points in a season.

A member of the English National Team, the Woodrow Wilson School major from New Canaan, Conn., will compete for the World Cup this summer.

Ashleigh Johnson
Ashleigh Johnson, who has twice been named the top women’s water polo player in the world, is one of two Princeton athletes ever to win an Olympic gold medal and then return to compete as a Tiger, along with Bill Bradley ’65. Johnson was the goalie on the United States team that won gold at last summer’s Rio Olympics. Internationally, she allowed just 28 goals, made 51 saves and was named the tournament’s top goalkeeper in Rio. Johnson was also the first-ever African-American to make the U.S. national team.

As Princeton’s goalie, Johnson finished her career with a 100-17 record, along with a school-record 1,362 saves and a .693 save percentage. She is a 19-time Collegiate Water Polo Association (CWPA) Defensive Player of the Week award winner, a four-time first-team all-conference player and the CWPA Player of the Year.

A finalist for the 2017 AAU Sullivan Award as the nation’s top amateur athlete, Johnson was also named an espnW IMPACT25 honoree for the Woman of the Year and the Swimming World Magazine’s Female Water Polo Player of the Year for the second straight season. She became the first water polo player to ever win the Women’s Sports Foundation SportsWoman of the Year award.

Johnson is a psychology major from Miami, Florida.

Kelsey Koelzer
A two-time Patty Kazmaier finalist for the nation’s top player, Kelsey Koelzer is Princeton’s first ever first-team All-America in women’s hockey. A three-time all-ECAC selection, Koelzer was named the league’s Best Defender and was the Ivy League Player of the Year in 2016. Koelzer was second in the nation in points per game for a defender the last two seasons. She finished her collegiate career playing in 128 games and is just the third defender in Princeton history to reach 100 points. She had an incredible 203 career blocks and finished with a +46 on-ice rating.

The No. 1 pick in the 2016 National Women’s Hockey League draft, Koelzer signed with the New York Riveters at the conclusion of the Tigers’ 2016-17 season. A Psychology major from Horsham, Pa.,, Koelzer also represented her country as a member of the USA Under-22 Team.

As a junior, on the way to being recognized a second-team All-America, Lussi helped lead Princeton to the Ivy League championship, the first NCAA women’s tournament game in the history of Roberts Stadium and the program’s second NCAA tournament win in four years.
She finished her career as the program’s all-time leader in goals, with 53, and points, with 122. She is the only player in Princeton soccer history, men’s or women’s, to score 50 goals, and her 53 goals are the most for any Ivy League player in 35 years.

A history major from Lutherville, Md., Lussi was drafted by the National Women’s Soccer League’s Portland Thorns. She has also competed with the U.S. Under-23 national team.

Cara Mattaliano
Cara Mattaliano led Princeton to an historic two-year run, and she became the program’s only two-time Ivy League Player of the Year because of it. As a junior, she was the only player in the Ivy League to rank in the Top 10 in both kills and digs, and she helped the Tigers become the first team in league history — any sport, any gender — to win the Ivy championship after an 0-3 start.

It would be hard to top that season, but Mattliano did so as a senior co-captain for the 2016 team. She repeated as Player of the Year and earned All-Region honors after leading the Ivy League in kills by a margin that was greater than the difference between the 2nd– and 10th-ranked players. A History major from Glen Ellyn, Illinois, Mattaliano ranked in the Top 10 in both kills and digs again as a senior, one of only two players in the league to do so, and she helped Princeton return to the NCAA tournament for the first time since 2007.

Julia Ratcliffe
Julia Ratcliffe is an NCAA champion and runner-up in the hammer throw, in which she has demolished any existing Ivy League point of comparison. A three-time All-America with her senior year honors still to be determined, Ratcliffe was the runner-up at her last NCAA Championships in 2015 and looks to return again this year as she currently has the second-best throw in the country.

An economics major from Hamilton, New Zealand, Ratcliffe is the first thrower in the Ivy League to win four hammer throw titles, and tacked on two weight throw titles indoors. Ratcliffe is the only hammer thrower in the 123-year history of Penn Relays to win the event four times. The 2014 U.S. Track & Field and Cross Country Coaches Association Scholar-Athlete of the Year, Ratcliffe holds the Princeton, Ivy League and New Zealand national record in the hammer throw. Every single throw in Ratcliffe’s career is better than the next best person in Ivy League history.

Anna Van Brummen
In her final competition for Princeton, Anna Van Brummen became the third fencer in program history to win an NCAA individual title and the first épée champion, achieving the honor in an all-Tiger final. That came after Van Brummen became the first Tiger in program history to earn four first-team All-Ivy League honors, going a combined 62-3 in four years at the Ivy League round-robin. Van Brummen, a geosciences major from Houston, Texas, went on to earn two All-America honors, finishing third in the nation as a junior before winning the NCAA championship this season.

Van Brummen added to her athletic accomplishments with two Academic All-Ivy League recognitions during her career.

The winner will be announced June 1 at the Gary Walters ’67 Princeton Varsity Club Awards Banquet.