The Princeton Varsity Club (PVC) selected a record nine Princeton varsity student-athletes to travel to the Hậu Giang Province in southern Vietnam during the summer of 2018 to participate in the Coach for College program, a global initiative aimed at promoting higher education through sports. As part of the Coach for College program, the student-athletes taught academics, athletics and life skills to 6th, 7th and 8th grade Vietnamese students while working alongside Vietnamese coaches and instructors.

The Princeton Varsity Club provided funding for the majority of the necessary expenses associated with the charitable service trip, with the remainder of the funds being raised by the individual participants. This marks the sixth year the PVC has helped to sponsor international service opportunities for varsity student-athletes. The PVC sat down with each student-athlete to learn more about their educational experience this summer.

What is the most impactful thing you took away from this experience?

Lindsey Schmidt ’21: “The most important lesson I learned from this experience was the importance of human connections, and how wonderful it is to truly get to know someone by listening to their life stories. On the second day of the second week of camp, our life skills lesson was simply us pulling the kids aside one by one, and asking them questions about their life, such as with whom they live, to whom they feel closest, if they want to go to University, what they want to be when they grow up, their biggest challenges thus far, etc. I was taken aback by the challenges these eighth and ninth graders had faced and overcome. They have endured struggles harder than anything I will likely every experience, and yet they are able to come to school smiling and laughing everyday. Not only did I learn about the kids, though, we also had reflections amongst the coaches at night. Listening to the stories of all the other coaches helped us bond, and left me with some of the closest friendships I have ever made.”

Mackenzie Meyer ’21: “More than anything, Coach for College challenged me. It pushed me outside of my comfort zone and forced me to adjust and adapt to a completely different environment. It made me realized that I am able to immerse myself in a new culture and make the best of any situation. I would not have had the same type of self growth that occurred during this trip had I been anywhere else this summer.”

What is your favorite memory of the trip and the Coach for College program?

Quinn Parker ’18: “For me, the most beautiful experience we had was when we got to go on a home visit with the kids on the last day of camp. We followed this windy, narrow road out into the country, past canals and fish farms and fields until we got to a stone house next to a massive rice paddy. We waded out into the rice paddy with all of the children, and there were clouds in the sky and the sun was just starting to set–it reflected on the water and the moment was just magical. We were all holding hands and leaning on each other to try to keep from falling into the water, and the children were laughing and smiling, and it was a pretty perfect moment.”

Max Schwegman ’18: “One of my students, Mai, struggled with math – the subject I was working on with him. He came a long way in just a couple of weeks, and his confidence is grew; I knew he was smart enough – the largest challenge was making him believe that. This is a common theme among Coach for College campers, and one of the reasons they cherish the camps so much: it builds them up. One of the coolest parts thought is it builds the coaches up too. I was lucky enough to experience that in 2016, and even more so to be able to facilitate such love and growth in my coaches this year in my director role.”

What was your “welcome to Vietnam” moment, where you encountered something you were not expecting or prepared for?

Lindsey Schmidt ’21:” I was the first American coach to arrive in Vietnam because I came from a two month trip/study abroad course in Europe. When I first arrived, I definitely felt a lot of culture shock, as I didn’t understand a single word that was being said and the surroundings were nothing like I’d seen in the States. One of the Vietnamese directors, Dat, picked me up, and he was very friendly and showed me around the city for a little bit before I went to bed. Going to bed, I was very overwhelmed by the differences in culture. The next day, however, we explored the city with all the other American coaches, too, and experiencing the differences seemed much more manageable, because I had other people with which I could experience it. Over the next three weeks, I continued to learn so much of the culture, and I’ve come to really appreciate it. I think some of the differences in their culture are really beautiful and might lead to a better quality of life, such as the value of community and sharing.” 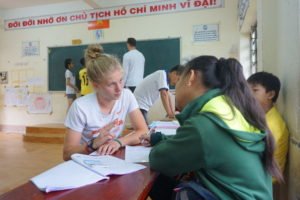 Since you returned this summer as a director after previously participating as a coach, how do the two experiences compare? How were they different? (i.e. director v. coach, overall adjustment to Vietnam lifestyle, etc.)

Quinn Parker ’18: “Coming back as a director was definitely different. On one hand, it made me very nostalgic for my own camp three years ago, and made me miss my kids dearly. However, being a director was exciting and challenging in its own way. For one, my team was now comprised of all of the directors and coaches rather than the children. This was a very challenging, yet rewarding role, as I was able to lead the new coaches and give them insight into the problems that they might face, and how people at my camp approached these scenarios. I also had to learn to be a lot more self-sufficient, as my Vietnamese counterpart and I, Đạt, were in charge of a lot of auditing, supply gathering, and leading reflection and feedback sessions. I think working closely with him and the other directors at my site helped me become a more effective leader and taught me how to set the example for the coaches.”
Max Schwegman ’18: “Being a Coach for College director was incredible in so many ways. Experiencing the growth and understanding Coach for College offers coaches was a true blessing in 2016 – but the opportunity to facilitate that personal growth in other students-athletes this year was an entirely different kind of fulfillment that inspires me not only to look out for those struggling, but also those around me who appear strong, but may need a shoulder. My biggest fear ins returning as a director was resentment – that I might resent that I wasn’t directly engaged with the kids each day; that I wasn’t teaching and coaching them individually. In the end, I made many connections with the children and it showed me that even as a director, I could still form those meaningful bonds with the children and the coaches.”

What would your advice be to current/future Princeton undergraduates who are considering participating in this program?

Quinn Parker ’18: “I would without a doubt recommend this program to any adventurous spirit at Princeton who enjoys working with kids and is willing to experience an entirely new culture. During our discussions, a lot of the coaches remarked that CFC was helping them discover who they were outside of just an athlete. A lot of them had been doing our sports since they were little, and their identity was shaped around this image of themselves as a stellar athlete and student. For a lot of the coaches who were approaching the end of their time at university, they felt a bit lost, because they had never known themselves without their sport. But CFC helps show you that all of your experiences as part of a team and all the lessons you learned from sports through the years make you who you are; they’re not just about the uniform you wear or the scores you achieve. CFC helped a lot of the coaches realize their potential as people, not just as athletes. It helped them apply the skills they learned on the field to the real world, and I think that is such a special thing to be a part of. On this alone I would recommend CFC to others–the personal growth and realization that the coaches go through is incredible. And that’s not even touching on the amazing food, breathtaking scenery, and incredible kindness of the community that we worked in. It was such an all-around amazing experience.”

Mackenzie Meyer ’21: “I would recommend this program to Princeton students because there is no other experience quite like it. You will grow as a person and gain a new perspective on life. It is a little scary at first because everything is so different and new, but you have 15+ coaches right by your side the entire time supporting you and helping you along the way. The people will make your trip.”

What would be your brief message to those PVC supporters whose generosity and funding helped make this experience available to you and other Princeton student-athletes?

Quinn Parker ’18: “To the supporters of PVC–thank you so much for your generosity and for giving myself and other student-athletes the chance to participate in this amazing program. CFC is such an eye-opening, transformative experience, and it allows you to push your limits and grow as both a person and an athlete. The friendships we made and the memories we have from Vietnam are ones that we’ll cherish forever–thank you for helping make this happen.”

Lindsey Schmidt ’21:  “To the PVC supporters, this will overlap some with my precious answer, but I just want to thank you all so much for helping me be a part of this experience. It has helped me grow exponentially as a person and learn so much about the world and values of humanity. I feel like I am a much better person coming out of it, and am motivated to use lessons I learned in Vietnam to drive the rest of my academic and life careers. I dream of going back there one day, but am just so incredibly thankful to have been blessed to be able to participate in Coach for College. From the bottom of my heart, thank you.” 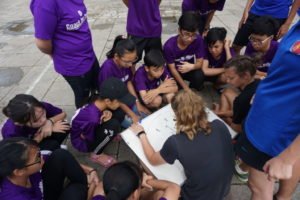