Eight Princeton student-athletes have been named finalists for the 2020 Art Lane ’34 Award which is presented annually to undergraduate student-athletes in recognition of selfless contribution to sport and society.

The Art Lane Award will be presented at the Gary Walters ’67 Princeton Varsity Club Awards Banquet on May 28. The annual Princeton tradition will be modified this year, held virtually starting at 8 p.m. EST. For more information on the 2020 banquet, click here. 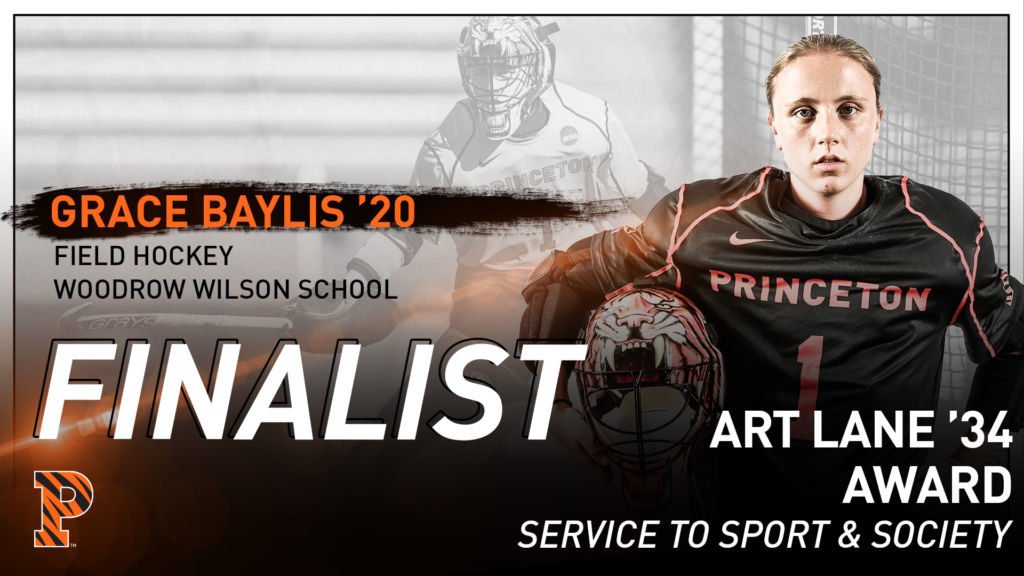 Grace Baylis, a two-year captain and four-year starter in goal for Princeton field hockey, helped lead the Tigers to two Ivy League titles and three NCAA Final Four berths. Her 53 wins are second all-time in program history, yet her accomplishments and community impact extend well beyond the field.

Baylis, the 2019 NJAIAW Princeton Woman of the Year, served on the Student-Athlete Wellness Leader (SAWL) executive team, Student Health Advisory Board, and as a SCORRE leader and Athlete Ally during her time at Princeton. Baylis helped implement the new “Pause Wall,” which proudly hangs in Caldwell Fieldhouse and encourages all a place to pause, reflect and leave a message of support or inspiration.

While battling back from a serious season ending injury freshman year, Baylis travelled to Namibia, Africa and volunteered with the Physically Active Youth (PAY) charity in a coaching and teaching role. Upon returning to campus, she helped resurrect field hockey’s partnership with the Friends of Jaclyn, a program that pairs children battling cancer with a local team or community group.

Baylis is from London, Eng. and a student in the Woodrow Wilson School of Public and International Affairs. 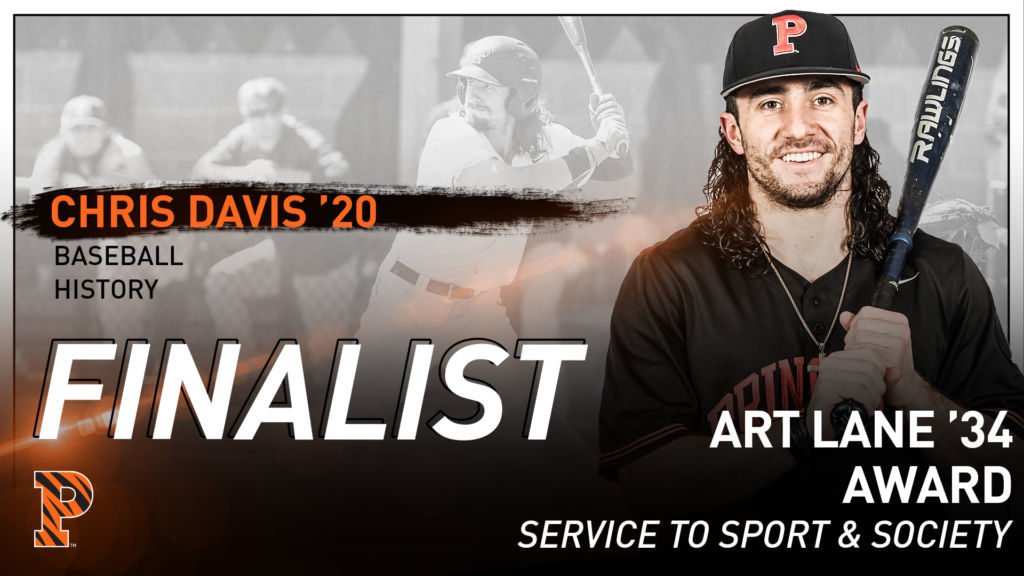 Chris Davis, a four-year starter in the outfield and two-time captain for Princeton baseball, was an exceptional example of service and leadership during his time at Princeton.

Davis helped orchestrate the baseball program’s involvement with Trunk or Treat this past fall, a Halloween-themed event for families in the Princeton community, and been an active participant with baseball’s annual partnership with the Special Olympics. Additionally, Davis has served his Princeton Athletics community as a member of Varsity Student Athlete Advisory Council (VSAAC), helping to lead efforts around the “All Stripes One Streak” initiative focused on campus inclusivity and “No Tiger Too Tough,” a campaign to eliminate the stigma around mental health.

As president of VSAAC this past year, Davis help implement forums (i.e., awareness events, podcast series, etc.) for fellow student-athletes to share how they overcame difficult challenges during their time at Princeton – Davis having overcome two serious injuries early in his career. In this leadership role, he also represented Princeton at Ivy League Student-Athlete Advisory Committee (SAAC) meetings.

Davis is a history major for Avon, Conn. 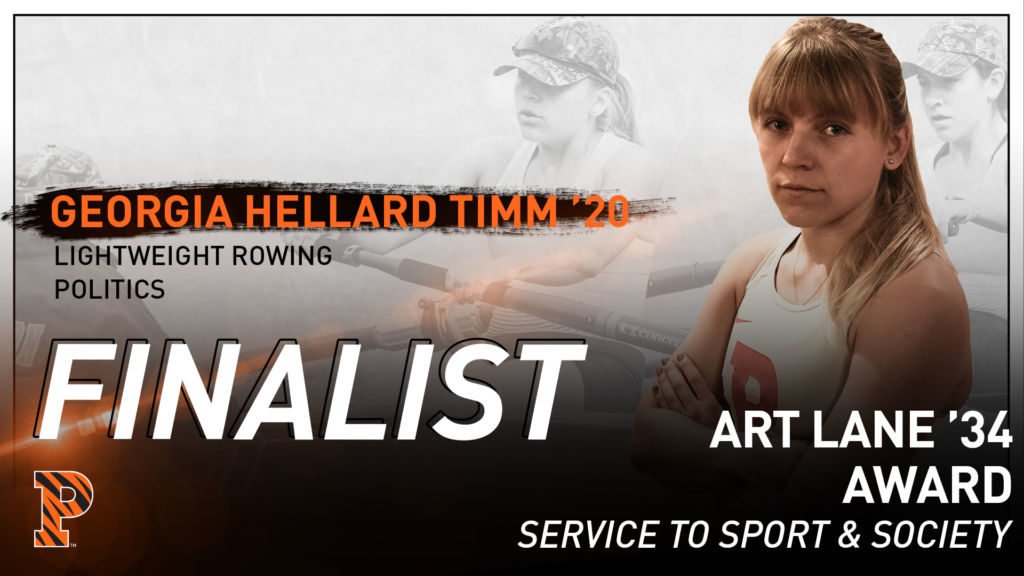 Georgia Hellard Timm, a two-time captain for Princeton women’s lightweight rowing, was a tremendous leader on and off the water during her time at Princeton. Twice named to the IRA All-Academic Team, Hellard Timm rowed in the first varsity eight her entire career, leading the Tigers to medals at six different championship regattas including their first Eastern Sprints gold medal since 2011.

On campus, she served as a Student-Athlete Wellness Leader and as a Resident Advisor in Butler College. Hellard Timm also demonstrated incredible strength and leadership as a first responder to a fatal construction accident she encountered on an afternoon walk to practice.

Hellard Timm is a politics major from London, Eng. 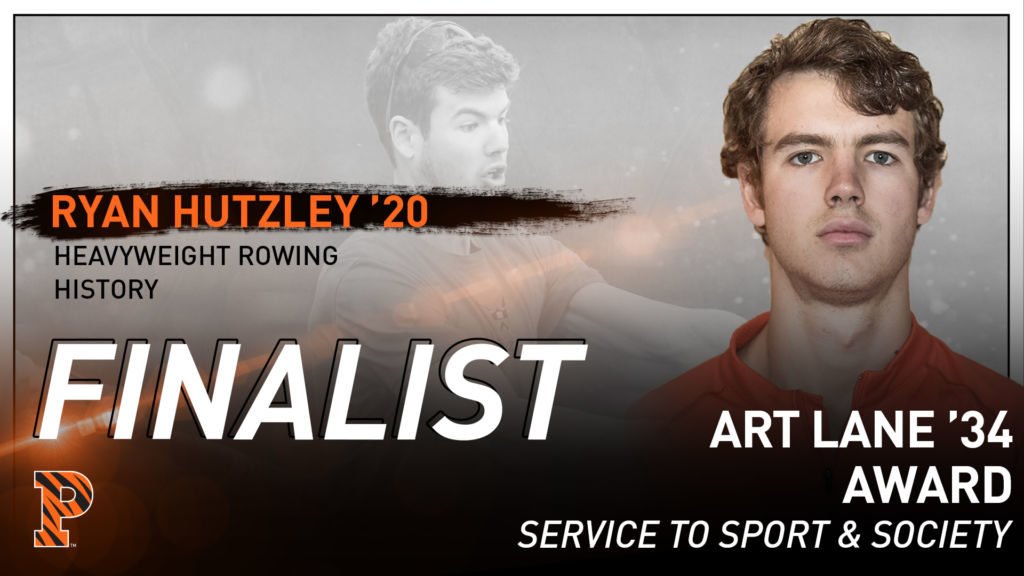 Ryan Hutzley helped Princeton men’s heavyweight rowing to three medals at Eastern Sprints during his career, including leading the fourth varsity eight to a gold medal in 2018. He has twice received IRA All-Academic honors.

Off the water, Hutzley played an integral role in growing the partnership between Princeton Rowing and the Special Olympics of New Jersey. Under his leadership, Princeton’s Special Olympics Rowing Program transitioned to a model that is entirely student-athlete run, and has nearly quintupled in participation across the four varsity programs. Hutzley worked directly with all of the Special Olympics athletes and their families to coordinate program expectations, training programs, training times and more.

In addition to spearheading the growth of the Special Olympics program at Princeton, Hutzley has played an important role in expanding the program across parts of New Jersey and New England and instilling the volunteer model he worked to develop at other peer boathouses.

Hutzley is a history major from Ocean, N.J. 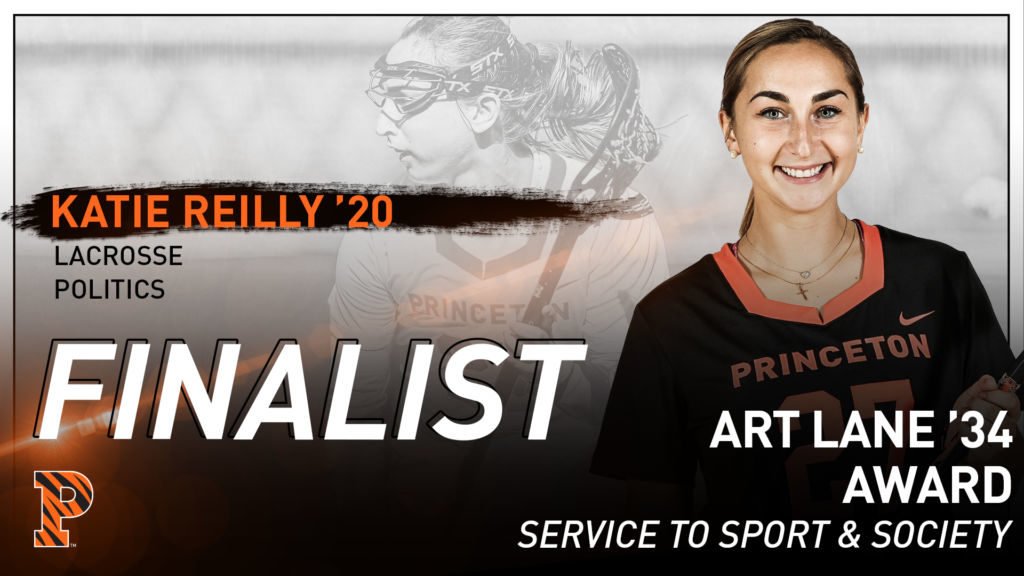 Katie Reilly, a senior co-captain and three-time Ivy League champion for Princeton women’s lacrosse, was tied for the team lead in assists at the time of this season’s cancellation. Yet, Reilly’s greatest contributions to her team may have come in the form of her infectious energy, leadership and commitment to serve others, including implementing a “positive shoutout” session to culminate each practice.

Reilly interned with Harlem Lacrosse, an organization that strives to empower academically at-risk children through mentorship and lacrosse. Reilly’s role involved on-field coaching, individual academic tutoring and mentoring and assisting in the administration of organizational resources.

Reilly previously worked for Project Play, a state-funded camp for low income families, where she supported campers with academics, athletics and life skills. While on-campus, Reilly engaged in community work with her team, including clinics with middle school students at P.S. 76 in New York City, and PVC-sponsored service programming.

Reilly is a politics major from Huntington Station, N.Y. 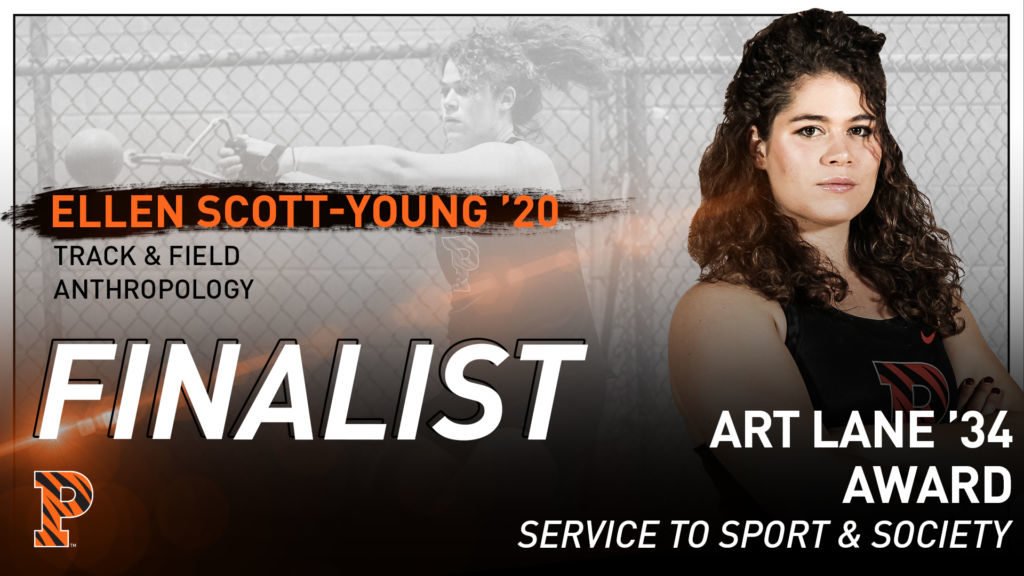 Ellen Scott-Young, a captain for the women’s track & field program, dedicated herself to service both on campus and abroad. When not throwing the weight or hammer in the circle, she reinvested in her campus community through her roles as vice president and social chair for the Class of 2020 and president of the Princeton Conservation Society. Scott-Young is passionate about raising environmental awareness, and has led efforts to protect declining bee populations, and worked with the Environmental Defense Fund to combat overfishing in the Yellow Sea.

Scott-Young also participated in the PVC-sponsored Coach for College program, where she taught English, life skills and sports to underprivileged youth in rural Vietnam. Scott-Young was an incredible ambassador for Coach for College, and had planned to return to the program this summer in an elevated Director role.

Scott-Young is currently volunteering with the COVID-19 Queensland Senior Support Network, serving as a phone operator supporting outreach from senior citizens in need.

Scott-Young is an anthropology major from Gold Coast, Australia. 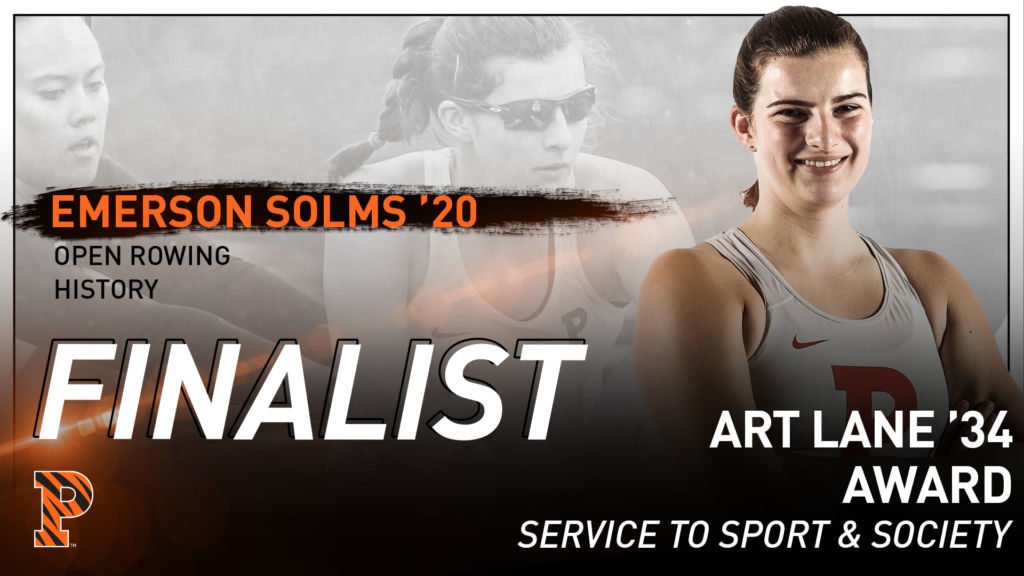 Emerson Solms helped lead the women’s open rowing first varsity eight to three Ivy League championships in her three full seasons on Lake Carnegie. A senior co-captain, Solms was chosen by her teammates to receive the Class of 1983 Cup, given to the individual who measures success not by results but by effort and positive attitude.

Solms served as an Advisory Board Member and orientation leader for the Princeton first year orientation program. Additionally, she was the communications coordinator for “Athletes in Action” and a mainstay in all PVC-sponsored service programming, including Reading with the Tigers, Weapons of Mass Construction, Teams & Toys and National Girls & Women in Sports Day.

Solms is a history major from Washington D.C. 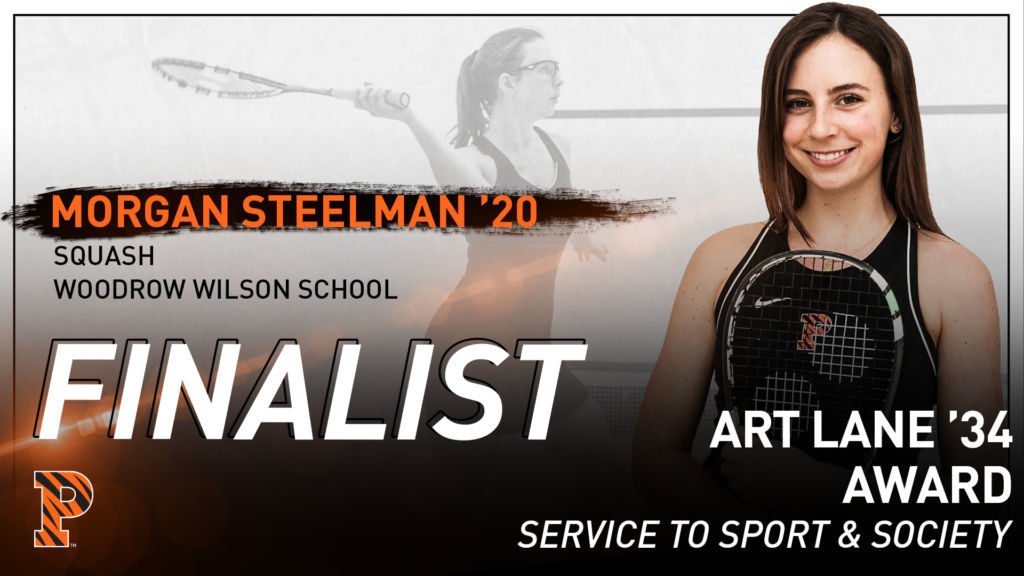 Morgan Steelman was a key contributor for Princeton women’s squash from Day One, leading the team in wins her first season en route to 40 career victories.  As a senior captain, Steelman led the Tigers to the CSA national championship match, the program’s first appearance since 2009.

On campus, Steelman served as a Peer Health Advisor, a Peer Academic Advisor and an Athlete Health Professions Advisor. As a sophomore, she was accepted into the prestigious FlexMed program at the Icahn School of Medicine at Mount Sinai, where she will matriculate after Princeton.

Steelman was awarded the Professor R.W. van de Velde Award for her independent work around racial disparities in New Jersey’s maternal mortality rates, an honor given to the Woodrow Wilson School junior who has done the most to assure the success of the Policy Task Force.  She took her research one step further, volunteering at the Department of Health and helping to create materials for the Commissioner of Health to present at hospitals statewide.

Steelman is from Philadelphia, Pa. and a student in the Woodrow Wilson School of Public and International Affairs.