The Princeton University Department of Athletics has named eight finalists for the 2020 C. Otto von Kienbusch Award, given annually to the top senior female athlete.

The C. Otto von Kienbusch Award will be presented at the Gary Walters ’67 Princeton Varsity Club Awards Banquet on May 28. The annual Princeton tradition will be modified this year, held virtually starting at 8 p.m. EST, and can be watched live here. For more information on the 2020 banquet, click here. 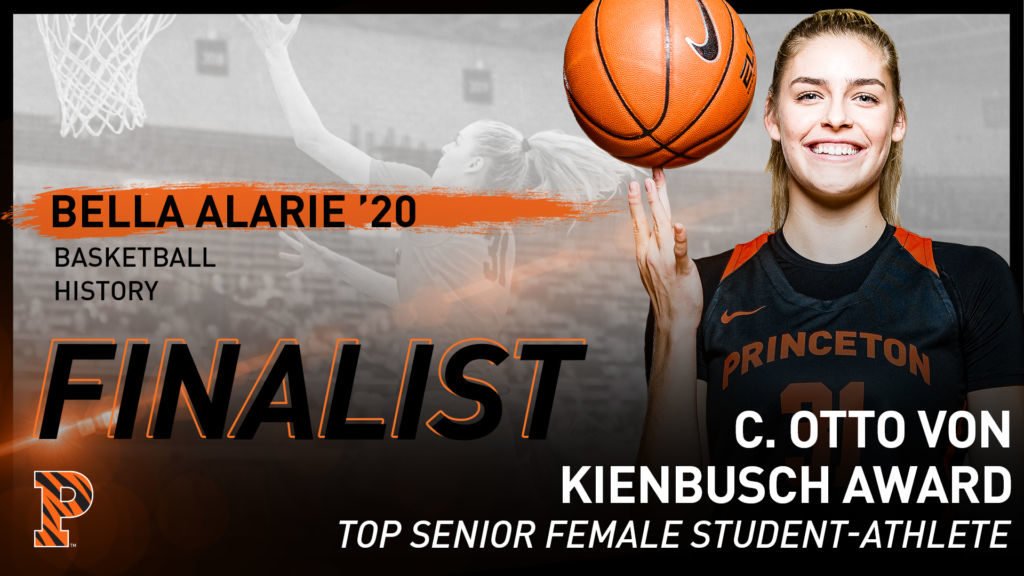 Bella Alarie, the all-time leading scorer in Princeton women’s basketball history, is a three-time Ivy League Player of the Year and a four-time first-team All-Ivy League selection. She led Princeton to three Ivy League championships, became the first Ivy League player to ever earn consecutive Associated Press All-America accolades and became the highest-ever WNBA Draft Pick for the Ivy League when she was selected fifth by the Dallas Wings.

As a senior captain, she led the Ivy League in scoring and was second in rebounding and blocks, fourth in field goal percentage and eighth in free throw percentage. The Tigers went 26-1 and ended the year on a 22-game winning streak with an RPI of No. 9, the best mark in Ivy history.

A history major, Alarie is a Bethesda, Md. native. 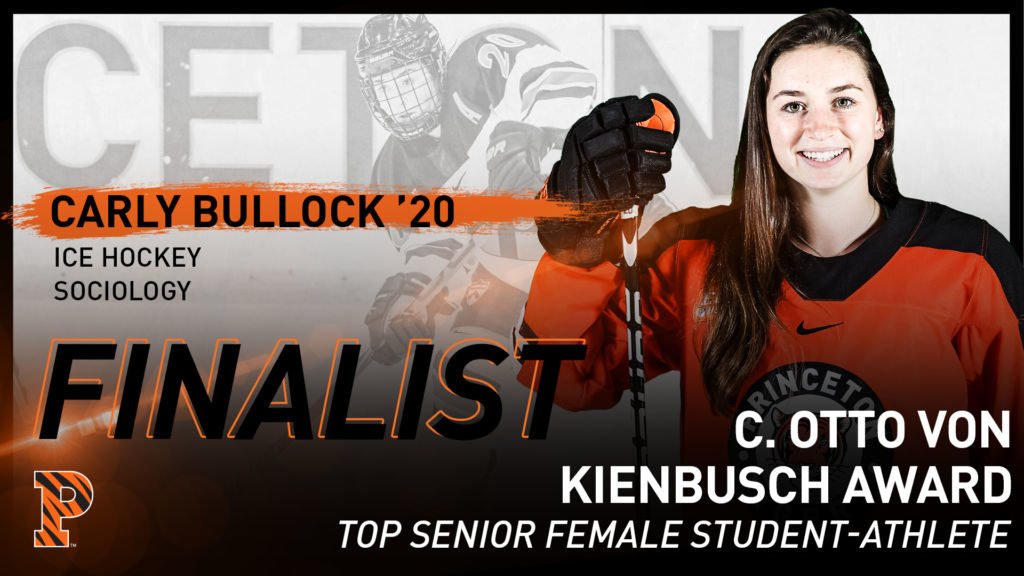 Carly Bullock capped her career by becoming just the fifth player in program history to score 30 goals in a season, and the productive year made her the program’s top goal scorer of the 21st century.

Bullock’s senior season saw her earn All-ECAC honors for the third time and first team recognition for the first time, and she finished as a four-time All-Ivy League honoree, earning a spot on the first team for the second time. She was also one of three players named as a finalist for the ECAC’s Best Forward award.

Finishing with a sixth-best 159 career points and fifth-best 95 career goals, Bullock helped Princeton to two NCAA tournaments, the 2019 Ivy League title, the program’s first-ever ECAC tournament title in 2020, and a consistent place in the top 10 in national rankings for much of her career.

Bullock is a sociology major from Eden Prairie, Minn. 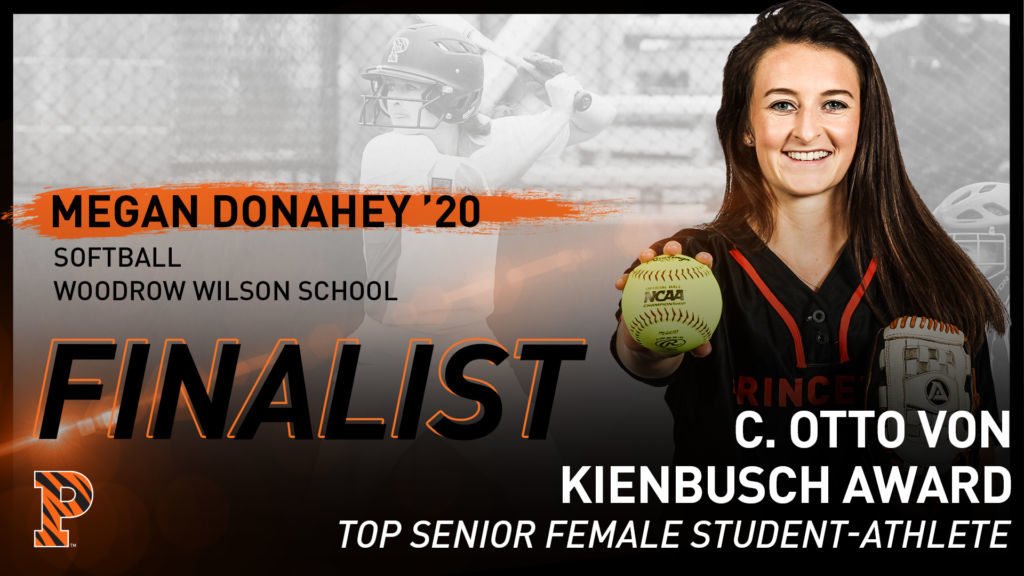 Megan Donahey earned All-Ivy League honors in all three seasons in which they were awarded, twice earning first-team All-Ivy honors and standing as the only league freshman to earn first-team All-Ivy in 2017, helping Princeton to the Ivy League title in that season. That season, Donahey had 58 hits, the second-most by a freshman in program history.

Donahey was a consistent presence atop Princeton’s statistical rankings throughout her career. As a freshman, she hit .377, second among regulars on the team, and led Princeton with 58 hits. As a sophomore, she led Princeton in both categories, hitting .328 and with 45 hits, and did so again as a junior, hitting .385 with another 45 hits. Donahey was well on her way to another successful season in 2020, hitting .346 and standing tied for second on the team with nine hits.

Even with an abbreviated senior season, Donahey was on her way toward the top lines of Princeton’s career records, finishing with 36 stolen bases, 11th in program history, 45 walks, tied for 14th, and her 157 career hits were 35 short of breaking into the top 10 in program history.

Donahey is a student in the Woodrow Wilson School of Public and International Affairs and is from Phoenix, Ariz. 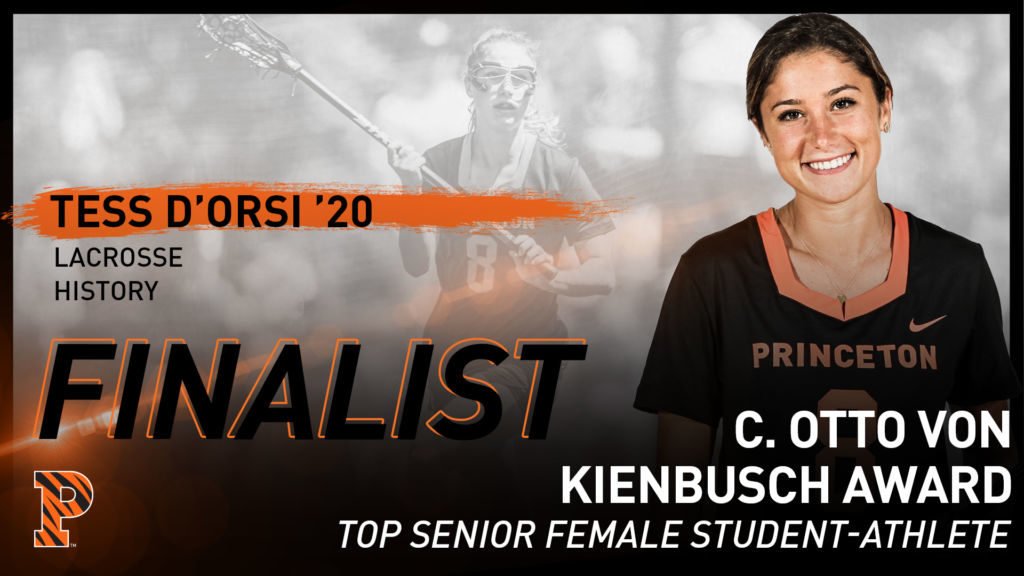 In just three seasons with Princeton’s women’s lacrosse team, Tess D’Orsi earned her place among the all-time greats. Over 58 career games, she totaled 187 points to rank No. 11 all-time in program history, and her 80 points in 2019 were the sixth-most in a season all-time by a Tiger.

In terms of goal-scoring, she will graduate No. 6 all-time in program history with 144 – including a 2019 season where she scored 64 times to rank No. 2 in a season over Princeton’s storied women’s lacrosse history. She earned her place on these all-time lists despite missing her team’s five games in 2020 with an injury.

When D’Orsi was on the field, she earned championships. In each of her three seasons, she won both Ivy League regular season and tournament championships and she played in three NCAA Tournaments – including a run to the 2019 Quarterfinals.

A three-time All-Ivy selection, D’Orsi was a second-team All-Ivy choice in 2018 and 2019 following honorable mention All-Ivy honors as a rookie in 2017. Last year, she was named second-team IWLCA All-Region and she was twice selected to the Tewaaraton Award Watch List.

A Sudbury, Mass. native, D’Orsi is a history major. 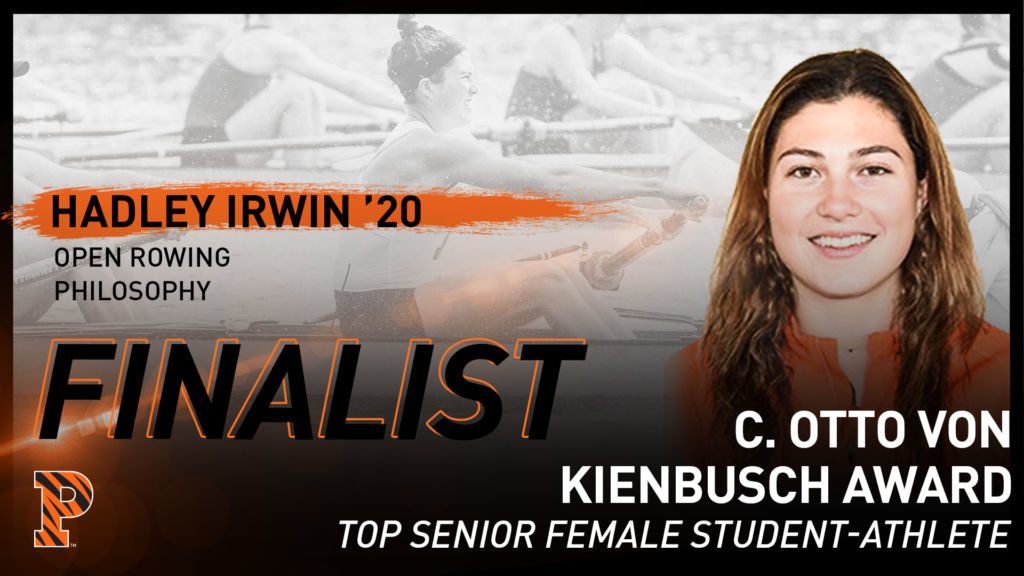 In 2019, she was the stroke for the 1V that had an undefeated regular season and won the Ivy League championship. The boat went on to finish seventh at the NCAA Championships, winning its Petite Final. In 2018, Irwin helped the 1V get to the NCAA Grand Final, earning fifth overall, its best finish since 2013. During the 2017 campaign, Irwin was one of only two freshmen to race at 1V the entire season, leading the Tigers to an 11-0 regular season mark and an Ivy crown.

She also raced internationally, winning a bronze medal in the W8+ at the 2018 U-23 World Championships for the United States.

A philosophy major, Irwin is a native of Washington, D.C. 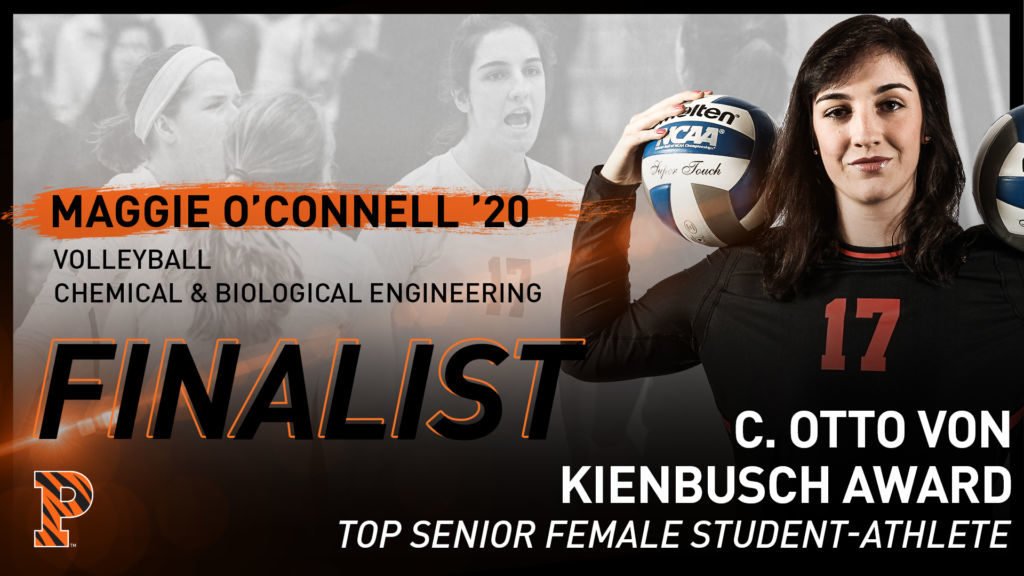 She is a chemical and biological engineering major from Katy, Texas. 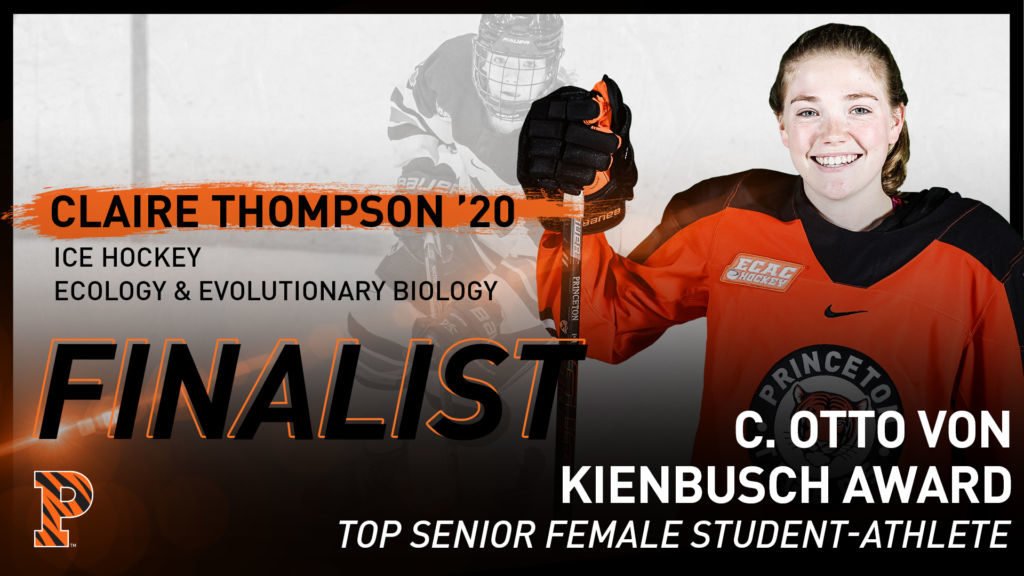 Claire Thompson helped Princeton to its first-ever ECAC women’s hockey tournament title and to a second straight NCAA tournament berth for the first time in program history while enjoying a well-accoladed senior season.

In 2020, Thompson earned the second All-ECAC and third All-Ivy honors of her career. She was also Princeton’s finalist for the ECAC Mandi Schwartz Student-Athlete of the Year award, and she has earned Academic All-Ivy recognition during her career.

A player with experience with the full Canadian national team, Thompson finished fifth among defensemen in Princeton history with 87 career points, becoming one of just two players in the last 13 years of Princeton hockey, along with former teammate Kelsey Koelzer ’17, to reach that number.

Thompson is an ecology and evolutionary biology major from Toronto, Ont. 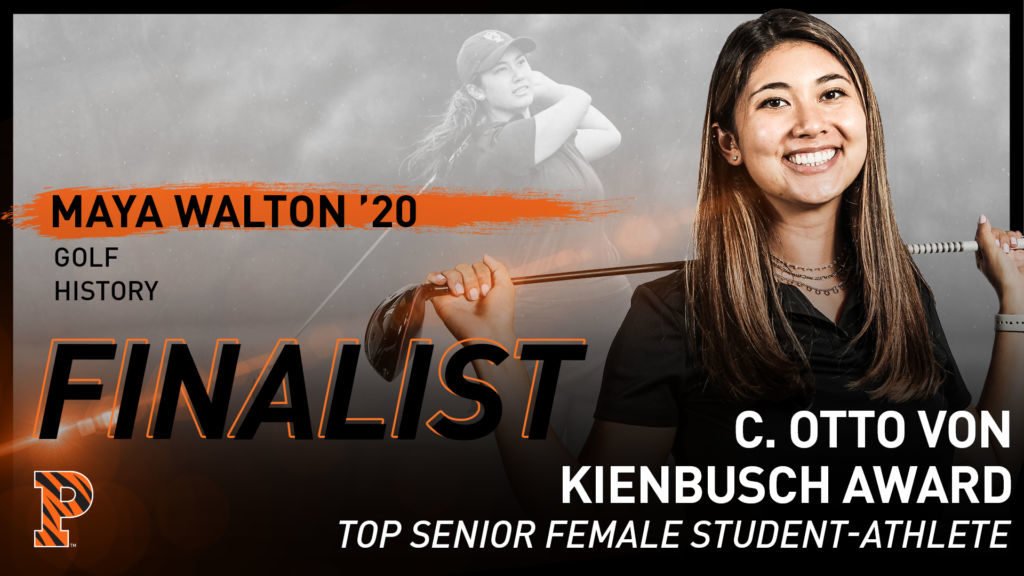 Maya Walton earned All-Ivy League recognition in all three years in which it was awarded, landing on the first team in her sophomore and junior seasons and earning Ivy League Player of the Year honors in 2018.

Turning in a stroke average between 72 and 75 in each of her four seasons, Walton finished in the top 10 at the Ivy League Championship in all three years and in the top five twice. She added her name to the list of Princeton players who have won individual tournament titles when she won the Towson Invitational in the fall of 2018.

With those Ivy League finishes, Walton helped Princeton to Ivy League titles in each of her first two seasons, and she became the third player in program history to advance out of the NCAA Regional and earn a bid to the NCAA Championships, tying for fifth at the NCAA Athens Regional in 2017 to move on.

Walton is a history major from Austin, Texas.