Co-hosted by seniors AJ Chen and Juliana Tornetta alongside Ford Family Director of Athletics Mollie Marcoux Samaan ’91, the Awards Banquet was an opportunity for the Tigers to rally together and commemorate the championships, successes, relationships and memories that will live on as the Class of 2021’s legacy. Click here to view highlights and features from the banquet. 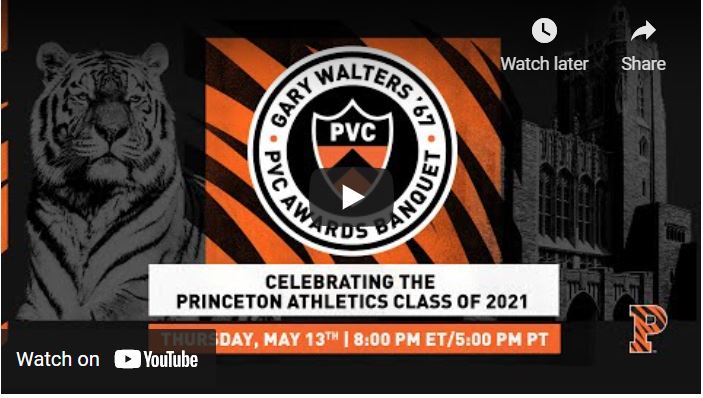 C. Otto von Kienbusch Award (full finalist release)
Awarded annually to a Princeton senior woman of high scholastic rank who has demonstrated general proficiency in athletics and the qualities of a true sportswoman. Presented in memory of C. Otto v. Kienbusch ’06, friend and benefactor of women’s athletics at Princeton.

Clara Roth is a two-time All-American field hockey player who also earned three All-Ivy and All-Region selections as a Princeton Tiger. During her stellar junior season which saw the Tigers reach the national championship game, Roth was named a Honda Sport Award Finalist, first-team All-America, Regional Player of the Year and first-team All-Ivy. She led all Ivy players in points and goals-per-game as she set career highs in both categories. As a sophomore, Roth collected her first All-America selection after being named the Ivy Offensive Player of the Year. She led the squad in goals, more than doubling her total from the year prior, and points. Roth is one of only 11 players in Princeton Field Hockey history to record 100 career points, nabbing 35 goals, 31 assists. Her 31 helpers are tied for seventh all-time. Roth is an Architecture major from Schwetzingen, Germany.

Daniel Kwak graduates as a two-time All-America, finishing as the national runner-up in the NCAA saber championship in 2019 before earning second-team All-America honors following the canceled 2020 NCAA Championships. Kwak was a 2018 first-team All-Ivy League honoree in a year that saw him advance to the NCAA Championships for the first of what would be three times in three seasons of competition for Princeton. In 2019, on the way to his NCAA runner-up finish, Kwak was also the runner-up at the NCAA Mid-Atlantic/South Regional, and in 2020 Kwak was a first-team all-region honoree as he won the NCAA regional title. A 2019 Academic All-Ivy League honoree and a psychology major from Los Angeles, Kwak wrote his thesis on the role of adult-generated hippocampal neurons in early-life adversity induced changes in defensive behavior.

Art Lane ’34 Award (Co-Recipients) (full finalist release)
Awarded to an undergraduate athlete in recognition of his or her selfless contribution to sport and society. Given in memory of Art Lane ’34 by friends and family.

Melia Chittenden is a two-time cross country/track & field team captain and a First Team All-Ivy and All-Region honoree. She qualified for the NCAA Cross Country championship in 2019, and has been named an NCAA Academic All-American three times. Chittenden helped lead her team’s partnership with the Smith Family Foundation in Trenton, N.J. to provide headphones to 2,000 underprivileged students to aid with virtual learning. She has also served as a community outreach intern for the catholic charities of central New Mexico, supported immigration efforts for the International Rescue Committee, participated in the Princeton Asylum Project and tutored incarcerated individuals through the Princeton-based Petey Greene Program. Chittenden, a Student-Athlete Wellness Leader, was selected as a presenter at the Mary George Research Conference, discussing her research on the exploitation of nannies and domestic workers. Chittenden, from Manhattan Beach, Calif., is a student in the Princeton School of Public and International Affairs while also holding minors in Arabic language & culture, Near Eastern studies and cognitive science.

Matthew Marquardt swam backstroke and butterfly for Princeton men’s swimming & diving team, scoring in three different Ivy League Championship meets. In 2019, Marquardt became the first Princetonian to receive the Slavin Fellowship for entrepreneurship, while also being honored at Princeton Research Day for his work on solar powered windows. He has led numerous research studies on campus related to student sleep habits, and developed the TigerDen Sleep Workshop to improve mental health and performance via sleep. Marquardt recently completed a 20 day solo cross-country bike ride, which raised over $13,000 in support of St. Jude Children’s Hospital and pediatric cancer research. Additionally, he served the Princeton community as a tutor for underprivileged first and second graders, and also as a Patient Care Ambassador at the Princeton Medical Center. From Cincinnati, Ohio, Marquardt is a chemistry major pursuing certificates in entrepreneurship, materials science, and engineering.

Class of 1916 Cup (full finalist release)
Awarded each year to the Princeton varsity letterwinner who continuing in competition in his or her senior year achieved at graduation the highest academic standing. Given by the Class of 1916 on the occasion of its 50th reunion.

Oliver Schwartz is a computer science major and member of the Princeton men’s heavyweight rowing team, having seen action in both the third varsity and fourth varsity boats. In his first two seasons, Schwartz helped lead two different boats to silver medals at Eastern Sprints. He is an Academic All-IRA honoree. Schwartz, a native of Sydney, Australia, is the President of the Princeton Chapter of the Tau Beta Pi Engineering Honor Society. He was previously awarded Princeton’s prestigious Shapiro Prize for excellence in academic pursuits. Off the water, Schwartz serves as a teaching assistant for several courses in the computer science department. He spent this past summer as an investment engineering intern for Bridgewater Associates, where he plans to work full-time following graduation.

Maddie Bacskai graduates from Princeton as a three-time captain of the field hockey program. A three-time first team All-Ivy honoree, she led the team to two Ivy League titles and three NCAA Final Four appearances. Additionally, she garnered first team All-America honors and was named Ivy League Defensive Player of the Year during her career. Despite missing the entire 2019 season with an injury, Bacskai was still elected team captain and provided valuable leadership throughout a season that saw the Tigers reach the National Championship game. Bacskai put graduation on hold for one additional season with the Tigers, only to have the Fall 2020 campaign canceled due to COVID. Bacskai, from Berwyn, Pa., studies in the Princeton School of Public and International Affairs.

AJ Chen is a senior captain for the men’s volleyball team. He was part of the 2019 squad that captured the program’s first EIVA Conference Championship in nearly two decades. Chen has served the Princeton community as a member of the MAVRIC Project, Forbes College Council, Peer Academic Advisor, and Student Athlete Wellness Leader (SAWL). This past year, Chen co-founded Asian Student Athletes of Princeton (ASAP), which aims to improve the Asian student-athlete experience through connection, conversation and community building. Chen was also recently recognized with the University’s Spirit of Princeton Award, which honors undergraduates for positive contributions to campus life. Chen is a Neuroscience major from Gaithersburg, Maryland.

Chris Wilson is a senior on the men’s heavyweight rowing team. Wilson arrived at Princeton at the age of 23 after serving in the United States Marine Corps, where he was deployed to Kuwait and Bahrain as a ground radio technician. Never having rowed prior to Princeton, Wilson quickly became a mainstay in the 4V and 5V boats, on top of being an inspiring leader and mentor to his teammates. Outside of the boathouse, Wilson is a member of the Princeton Veteran’s Alliance and University Store Board of Trustee, and also served as a teacher and mentor through Coach for College, a summer service program in Vietnam. Wilson is an Art and Archaeology major originally from Atoka, Tennessee.

Class of 1967 PVC Citizen-Athlete Award (full release)
Presented by the Princeton Varsity Club for selfless and noble contributions to sport and society.

Vietta Johnson’s contributions as a Princeton athlete came in sprints that lasted barely more than 10 seconds at a time. Her post-graduate contributions to society for the last nearly 40 years have been more of a marathon, one that she continues to run at an inspirational pace. Johnson, a member of the early Princeton women’s track and field dynasty who went on to Harvard Medical School and Harvard School of Public Health and then to a career devoted to providing medical care in underserved communities, has been named the 2021 recipient of the Class of 1967 PVC Citizen Athlete Award.

“I am thrilled to present this award to Vietta on behalf of the Princeton Varsity Club and the entire Department of Athletics,” says Ford Family Director of Athletics Mollie Marcoux Samaan. “She is an incredibly impressive person who lives life with great passion and enthusiasm and clearly with high energy. She is also the personification of our ‘Be A Tiger’ values and the epitome of what it means to ‘Achieve, Serve, Lead.’ She’s such a worthy recipient of this award.”

Johnson, a member of the Class of 1982, is a trailblazing orthopedic surgeon based in Chicago who has served as a mentor to so many who have followed through the doors she helped to open. Her career has been spent providing healthcare to many who otherwise might not have had access, with a huge percentage of her patients on some sort of public assistance.

“This award makes me feel that what I’ve been through and what I have done matters,” Johnson says. “I want to thank Mollie and the Princeton Varsity Club for recognizing me with this amazing honor. To be able to be honored this way during a celebration of the next generation of Princeton athletes reminds me of how I cherish my own time at Princeton as an athlete and student/scholar and especially the relationships I had with my coaches and teammates. Here’s a Tiger cheer and best wishes to the Class of 2021.” 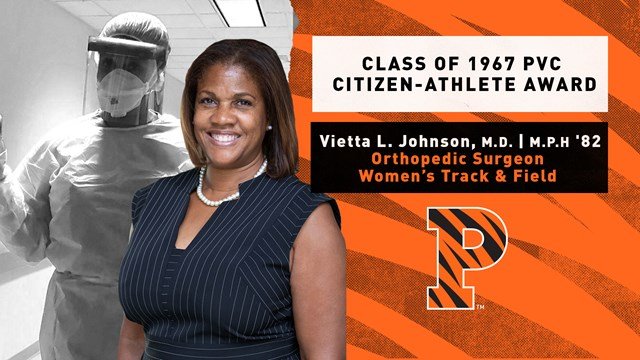 Marvin Bressler Award (full release and video feature)
Awarded to that member of the Princeton family who, through heartfelt support of the University’s student-athletes and coaches, best embodies a belief in the lifelong lessons taught by competition and athletics as a complement to the overall educational mission. Awarded in the spirit of Marvin Bressler, professor of sociology, 1963-94.

Professor Adam Maloof, a long-time Athletics Fellow for Princeton baseball and Chair of the Faculty Advisory Committee on Athletics and Campus Recreation (FACA), has been named the recipient of the 2021 Marvin Bressler Award. Maloof is a Professor in the Department of Geosciences whose research focuses on decoding records of Earth’s history that shed light on the origins of animals and the evolution of Earth’s climate and geography. Maloof, who has taught at Princeton since 2006, founded the Princeton Grinder Lab, which is investigating the three-dimensional nature of objects and structures at the millimeter to micron scale using an automated serial grinding and imaging system known as GIRI. During his time at Princeton, Maloof has been awarded a James B. Macelwane Medal in recognition of “significant contributions to Earth and space science.” He was also selected as an Alfred P. Sloan Fellow, an honor chosen, “on the basis of their independent research accomplishments, creativity and potential to become leaders in the scientific community.”

Maloof has been an Athletics Fellow for the baseball program since 2012. A former collegiate baseball player, Maloof can often be spotted taking in games or practices from Clarke Field or supporting the Tigers on the road. In addition to his academic support role as a Fellow, he has served as a thesis advisor to several baseball student-athletes over the years, including 2016 Ivy League Pitcher of the Year Chad Powers ’17. Maloof has been a member of FACA for several years, serving as the Chairperson for the past two years. In this role he works directly with Ford Family Director of Athletics, Mollie Marcoux Samaan ’91, to enhance the athletic-academic integration at Princeton.

Maloof graduated from Carleton College with a degree in Geology, where he was both a both baseball and swimming & diving student-athlete. He earned his Ph.D. in Earth and Planetary Sciences from Harvard in 2004. 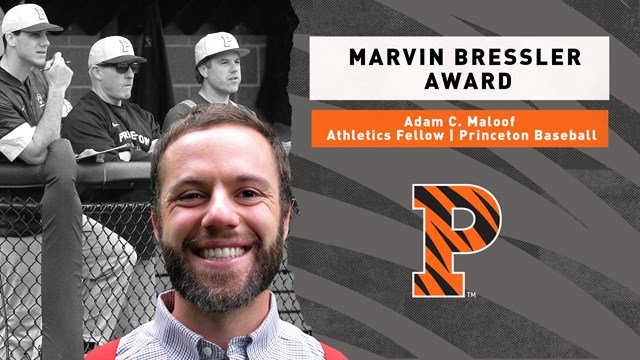