A Tribute to Dick Kazmaier ’52 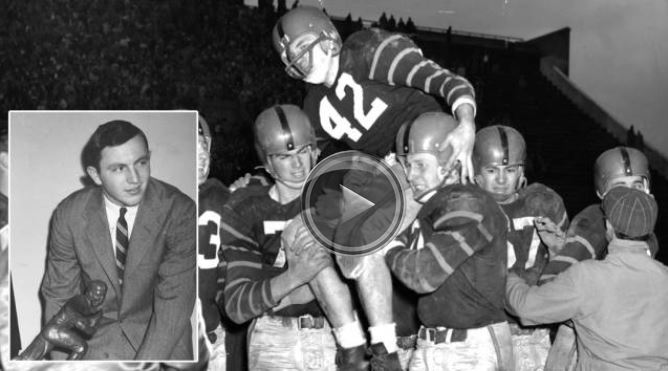 Dick Kazmaier ’52, the 1951 Heisman Trophy winner and a 1966 inductee into the College Football Hall of Fame, has been the face of Princeton Football since his days as an undergraduate, when he led Princeton to the 1950 national championship. He is Princeton’s only Heisman Trophy winner, and the most recent of three in Ivy League history to win the sport’s most prestigious honor.A friend to both the University and the football program throughout his life, Kazmaier spent time as a University trustee and was a founding member of the Princeton Varsity Club Board of Directors. He sent three of his six daughters to Princeton, and he had visited with the team as recently as prior to the 2011 Harvard game, as well as following the 2010 victory over Lafayette, the first victory for current head coach Bob Surace ’90.Sadly, Kazmaier passed away Thursday, Aug. 1, 2013 at the age of 82. He and wife Patricia had six daughters: Kathy L. Donnelly, Kristen Kazmaier Fisher, Michele S. Kazmaier, Patricia J. Kazmaier-Sandt ’86, Susan M. Kazmaier ’81 and Kimberly Picard ’77.

On November 1, 2013, the athletics community gathered to pay tribute to a legendary Princetonian.