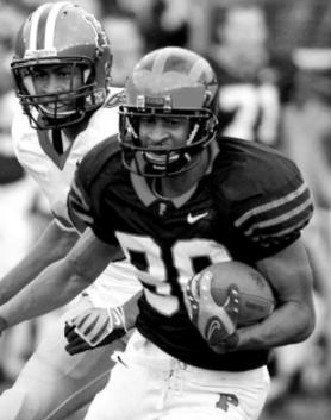 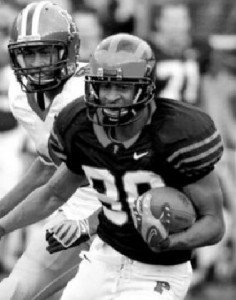 I am a strong believer in the value of athletics. I often tell people that I have learned more on the athletic field, the weight room, and the track than I have in any classroom. This is a significant statement given the amount I’ve learned academically in Princeton, but sport can be more difficult than any precept, problem set, or final paper. It is always more memorable and often times more practical in life. Keeping this in mind, I want to share with you three lessons sport has demonstrated to me during my time here which I believe are applicable to just about everyone in this room as well.

The first lesson began with an incident in the weight room my freshmen year. We were in the middle of an off season lift and moving through a leg circuit. The whistle had just blown and as I moved to the next station I saw Coach Jackson, our defensive backs coach. He was about to move to another station but made eye contact with me and decided to stay right at the station he was already at. As I did the exercise, already tired, and fatiguing more he started saying “faster” and “is that all you’ve got.” Somehow this didn’t give my legs any extra strength, so he moved on to saying “your brother is kicking your butt.” Now my brother plays football at Harvard and we are twins. He also plays the opposite position and incidentally, had just had a much better freshmen football season than me. Coach J had gotten to know both of us fairly well during the recruiting process and knew how competitive we were against one another. So of course he knew this got under my skin. He continued to chant those words or some variation of it to the rhythm of the reps I completed during the exercise. As I fatigued and got slower he spoke slower. As I got mad and snuck in a faster rep, he spoke faster. All the while I kept angrily thinking how bringing up my brother had little to do with an off season workout. After my turn at the station was done, I made some smart alec comment to him between pants, but he laughed and simply said “Always compete.”

That quote has always stuck with me, and my coach’s way of getting that point across was actually quite a good bit of coaching for both football and life. Coach Jackson was and is completely right. Choosing to compete, even in something that doesn’t seem to matter is always half the battle. There are a lot of times when we are behind the 8 ball, could have plenty of excuses for not achieving a goal, or are at some disadvantage relative to our peers. But being a student-athlete at Princeton has prepared us to be successful despite long odds. We have had to compete against the best collegiate athletes by playing at the Division I level and against the best collegiate minds by attending such a prestigious institution. We have had to earn every grade, every minute of playing time, and every championship by choosing to always compete. Very few student-athletes can say they played against the best athletes while handling some of the most difficult classes and earning grades curved against some of the brightest minds. But the people in this room can which puts you in a position to fight for a win whether it’s in a tough job market, a difficult grad school application, or simply a tough position in life by always competing.

The next thing we’ve learned is to handle adversity with poise. Whether it is playing in front of thousands of people, getting “corrected” by a coach, or playing from behind on the road the ability to be poised in an uncomfortable or difficult situation is probably the most underestimated trait of the Princeton student-athlete. I realized this particularly in my internship last summer. The company I worked at had meetings where it was the goal of senior management to basically publicly embarrass interns as they tried to present on their knowledge of the industry and see how the interns responded. You’d be surprised the amount of people who literally froze or could not speak in an environment like this. There were several other Princeton student-athletes in this room who were in the same program as myself, and many of us got put in this situation. Yet despite some of senior management’s best attempts, none of the Princetonians showed any panic or fluster. I’m sure many of us felt flustered, but outward appearances and the ability to proceed calmly and rationally were clearly traits which marked us. I have no doubt anyone else in this room would have been just as successful. After all, being late to a workout or getting chewed out by coach is far more frightening than someone trying to throw you off with a couple of questions or brainteasers. Believe it or not this trait which bonds all of us, will be significant in the next phases of our lives.

The final (and probably most important) lesson I will leave with all of you tonight is one that I am sure many of you have discovered without my need to point it out, and that is: If you need to count on someone, count on someone you have done something difficult with. There is no one on this campus that will have your back like a teammate. Whether you are from different states, countries, socioeconomic backgrounds, ethnicities, political viewpoints, or anything else, there is nothing like playing a 4 years of a varsity sport with someone. It is not easy to be successful athletically and academically here. There is a lot of sacrifice and, at times, disappointment. But success is extremely attainable with the support of your closest peers. The tough times are always made better by your teammates and families because they have been there for you since day 1 and been by your side during this 4 year odyssey. And this is something that will not end tonight or on June 2. The relationships we have forged will no doubt serve us down the road because of the love, respect, blood, sweat, and tears that we have shared. So tonight celebrate all the trials and triumphs, the disappointments and surprises, the failures and successes because they have contributed so much to the people we are, and the people we will become.