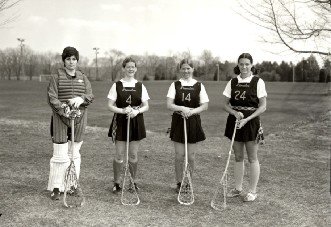 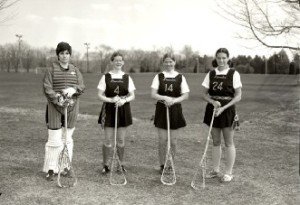 When I arrived at Princeton in the fall of 1973, only one class of women had graduated. We women were still an anomaly and a definite minority. But I was lucky! I had an immediate band of friends because I put on my gym shorts and cleats and headed down to Poe Field for pre-season field hockey. Hockey practice gave a shape to my days and a sense of normality. It forced me to organize my time and to stay on track. And I made great and lasting friendships with women who had similar interests.

Springtime arrived and it was time to gear up for lacrosse. Back in those days, athletes didn’t specialize and sports seasons began and ended in their seasons. There were many cross over players from field hockey to lacrosse but we didn’t have as deep a pool of players. There were enough players to field a decent varsity team but we went out and recruited our friends who were game to learn and put together a very decent JV. Many of those one year recruits dropped out of the sport as it became more competitive but those women can always say they were on the founding edge of Princeton’s women’s lacrosse program.

A final anecdote that might speak to some of the earliest women athletes at Princeton concerns a rather famous Classic Professor, Professor Bourne. He taught Roman History and that course fulfilled a distribution requirement in the humanities. Now in those days he was know as A, B, C Bourne, which mean A for Athlete, B for Boy and C for Co-Ed.

Obviously Professor Bourne had not embraced co-education. One day we had an away field hockey game and I had to miss precept. Out of courtesy (and probably hoping to salvage a grade) I told my preceptor that I would have to miss his Friday class. I assumed that this information was perfunctory; however this preceptor informed me that I had to make an appointment with Professor Bourne (HIMSELF) to get an excuse. Yikes! I made the appointment and explained myself and his response was, “You are going to be very sorry, very sorry indeed at the end of the semester.” So of course, I asked with some trepidation, “Why? Why will I be so sorry?” and he said “You will have been playing field hockey and all the while will not have knitted me my sweater.”

I think I said something articulate like “Uhhhh” and he said, “Go, go to your field hockey game if you must!”

Somehow I think that that meeting was my first real life job interview. I never knit him a sweater and I don’t think I made an A for Athlete, but I didn’t make a C for Co-Ed either! Let’s call it a B+!