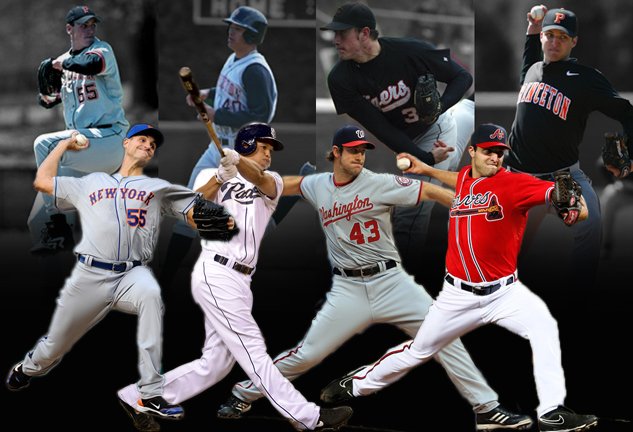 Young, Venable, Ohlendorf and Hale have all experienced success in Major League Baseball, after each having standout athletic careers at Princeton.
[divider]
Chris Young ’02
Young excelled in both baseball and basketball at Princeton and was named the Ivy League’s first male two-sport Rookie of the Year. He was drafted by the Pittsburgh Pirates in the third round of the 2000 MLB Draft, but waited to sign until he was assured that he would be able to complete his education.  Young finished his thesis, “The Impact of Jackie Robinson and the Integration of Baseball on racial Stereotypes in America: A Quantitative Content Analysis of Stories about Race in the New York Times” while traveling on busses as a member of the minor league Hickory Crawdads. Known as a control pitcher (standing at 6’ 10”), Young went on to play for the Texas Rangers, San Diego Padres and the New York Mets. He was elected to the 2007 MLB All-Star Game via the All-Star Final Vote and is currently a free agent. He has stayed active in the Princeton Athletics community, taking in baseball and basketball games, serving as a guest speaker as part of the PVC “On the Road” series, and is currently a member of the Princeton Varsity Club Advisory Committee.
[divider]
Will Venable ’05
Venable was recruited to Princeton as a basketball student-athlete, and did not play baseball as a freshman. After deciding to resume baseball as a sophomore, Venable continued to compete in both sports through his senior year. He was named first team All-Ivy in both sports, only the second athlete in Ivy League history at the time to do so. The first was Young. He competed in NCAA tournaments for both the Tiger baseball and basketball teams, competing in a total of four as a Princeton Tiger.  He earned his B.A. in Anthropology. Will’s senior thesis, “The Game and Community: An Anthropo­logical Look at Baseball in America and Japan” compared American and Japanese culture by presenting histories of baseball’s evolution in each country.  Venable was drafted in 2005 by the Padres organization and made his MLB debut in 2008. Since 2011 he has been a regular starter for MLB club and he is now Princeton’s MLB hit leader with 442, surpassing Moe Berg ’23. Although he broke into the Major Leagues as a center fielder, he has played mostly right field since his second season. Venable has frequently batted leadoff and has on several occasions come within one hit of the cycle. As of November 2013, he has finished among the top ten in the National League in triples four times and in stolen bases twice.
[divider]
Ross Ohlendorf ’05
Ohlendorf majored in Operations Research and Financial Engineering and received the George Mueller Award from the University for combining “high scholarly achievement in the study of engineering with quality performance in intercollegiate athletics”.  In his senior thesis, Investing in Prospects: A Look at the Financial Successes of Major League Baseball Rule IV Drafts from 1989 to 1993, Ohlendorf used saber metrics to demonstrate the return on investment from the Major League Baseball Draft.  In 2002, as a freshman pitcher, he was named the Ivy League Rookie of the Year.  Ohlendorf was selected in the fourth round of 2004 Major League Baseball Draft by the Diamondbacks.  Since the draft, Ross has been a member of the New York Yankees, Pittsburgh Pirates, Boston Red Sox, San Diego Padres, and is currently with the Washington Nationals.  When with the Pittsburgh Pirates, Ohlendorf faced Will Venable and became the first Princeton pitcher to oppose a Princeton batter.
[divider]
David Hale ’11
Hale earned a degree in Operations Research and Financial Engineering, writing a senior thesis that used performance statistics to decipher the causes of major arm surgeries among pro pitchers.  His hometown team, the Atlanta Braves selected Hale in the third round of the 2009 Major League Baseball Draft. He made his major league debut on September 13, pitching five innings and recording nine strikeouts, breaking the franchise record for strikeouts in a debut.  In his debut, the first batter he faced was Will Venable, who he struck out leading off the game for the Padres. They became the second Princeton batter vs. Princeton hitter matchup in major league history.