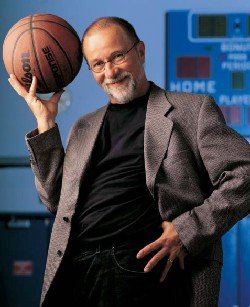 The Princeton Varsity Club was pleased to welcome Drew Hyland ’61, Charles A. Dana Professor of Philosophy, Trinity College, back to campus as part of the Jake McCandless ’51 PVC Speaker Series. Professor Hyland gave his lecture, “The Sweatiest of the Liberal Arts: Athletics and Education” on Thursday, November 30th in McCosh 10 at 7:30pm.

Drew A. Hyland graduated from Princeton University in 1961 with Honors in Philosophy.  He lettered on the varsity basketball team for three years.  In his sophomore year (58-59) the team tied for the Ivy League championship with Dartmouth, and in his junior and senior years Princeton won the championship outright.

Upon graduation, he pursued his MA and PhD in Philosophy at Pennsylvania State University, receiving his PhD in 1965.  He began his formal teaching career at the University of Toronto, where he taught from 1964-1967.  In the fall of 1967 he came to Trinity College in Hartford, CT, where he has taught ever since, and where, in 1980, he became the Charles A. Dana Professor of Philosophy.  In addition, he has been a visiting professor at the New School for Social Research and at Boston University.

His fields of specialization are Ancient Greek Philosophy, 19th and 20th century Continental Philosophy, Philosophy of Sport, and Philosophy of Art.  In 1992, he was awarded the Brownell Prize for Teaching Excellence, Trinity’s highest teaching award.  Professor Hyland has written ten books, two of which are on the philosophy of sport.  He continued playing basketball until he was 62 years old, when, out of respect for the game, he retired.

Professor Hyland has published 6 books and more than 40 journal articles. For further information on his work and accomplishments, please click here.