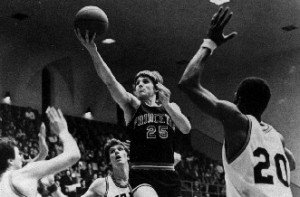 As I look back at the lessons I learned at Princeton, two realizations stand above all others. The first is the importance of the quality of your work. The second is learning what it takes to play to win. While I had a basic understanding of these principles before arriving on campus, my experiences at Princeton crystallized the realization that when competing with some of the best and brightest both in the classroom and on the basketball court, your ultimate success and satisfaction is determined by your effort, commitment and dedication to doing the little things well.

I arrived on campus with good but hardly superlative credentials in the classroom and on the basketball court, having graduated in the top 5 percent of my high school class and having achieved all-state honors. I chose to study engineering because of the analytical discipline and the fact that in the mid-1970’s, students graduating with technical degrees seemed to have more job opportunities. Combining academic demands with playing for Pete Carril on some outstanding basketball teams was hard. There were many times that the engineering workload combined with the daily scrutiny of Coach Carril seemed insurmountable. At the end of the day, teammates and roommates helped me get through, but ultimately it was hard work that enabled me to survive. You learned a lot about humility when surrounded by great minds in the classroom and great coaches and athletes at practice, but you also learned a lot about yourself and the value of effort and perseverance.

Although I learned many things from Coach Carril, one lesson that he preached was that no one sets out in sports or in life to lose, but few people truly commit to doing all the little things necessary to win. Ultimate success often comes down to doing the little things in life well every day. You learn that you can rely on good habits when things become challenging. Teams that do the little things well make team goals paramount, beyond individual accomplishments, and the gratification realized by being part of a focused, committed team provides more satisfaction than the victories themselves. My teammates could be counted on both on and off the court. We shared many successes, but also learned as much, if not more, from when we fell short of our goals. The friendships spawned in dealing with and overcoming adversity formed bonds that remain true years later.

These lessons and perseverance served me well at Princeton. Although I didn’t graduate with honors, I was named Ivy League Player of the Year and twice honored as an academic All-American. After graduation, I realized that no matter what challenges I faced, hard work and a focused commitment to succeed ultimately would pay off. For me, my experience at Princeton had relatively little to do with the gothic architecture, eating clubs or university traditions. Rather it was driven by the opportunity to challenge and test myself against the best, to learn how to deal with both success and failure and the recognition that working together with great people, as a team, regardless of the outcome, provided the greatest satisfaction of all.