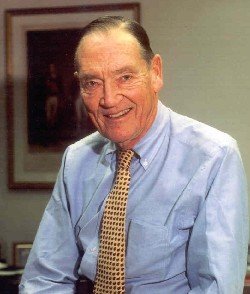 The Princeton Varsity Club welcomed Jack Bogle ’51 back to campus as the keynote speaker for the Spring 2009 edition of the PVC Jake McCandless ’51 Speaker Series. Mr. Bogle delivered his address entitled “Aspiring to Build a Better Financial World” on Thursday, April 30, 2009 at 7:30pm in McCosh Hall 10 to a diverse audience.

John C. Bogle, 79, is Founder of The Vanguard Group, Inc., and President of the Bogle Financial Markets Research Center. He created Vanguard in 1974 and served as Chairman and Chief Executive Officer until 1996 and Senior Chairman until 2000. He had been associated with a predecessor company since 1951, immediately following his graduation from Princeton University, magna cum laude in Economics. He is a graduate of Blair Academy, Class of 1947.
The Vanguard Group is one of the two largest mutual fund organizations in the world. Headquartered in Malvern, Pennsylvania, Vanguard comprises more than 120 mutual funds with current assets totaling more than $1 trillion. Vanguard 500 Index Fund, the largest fund in the group, was founded by Mr. Bogle in 1975. It was the first index mutual fund. The story of his life and career is told in John Bogle and the Vanguard Experiment: One Man’s Quest to Transform the Mutual Fund Industry, by Robert Slater (1996).
In 2004, TIME magazine named Mr. Bogle as one of the world’s 100 most powerful and influential people, andInstitutional Investor presented him with its Lifetime Achievement Award. In 1999, Fortune designated him as one of the investment industry’s four “Giants of the 20th Century.” In the same year, he received the Woodrow Wilson Award from Princeton University for “distinguished achievement in the Nation’s service.” In 1997, he was named one of the “Financial Leaders of the 20th Century” in Leadership in Financial Services (Macmillan Press Ltd., 1997). In 1998, Mr. Bogle was presented the Award for Professional Excellence from the Association for Investment Management and Research (now the CFA Institute), and in 1999 he was inducted into the Hall of Fame of the Fixed Income Analysts Society, Inc.
Mr. Bogle is a best-selling author, beginning with Bogle on Mutual Funds: New Perspectives for the Intelligent Investor(1993); Common Sense on Mutual Funds: New Imperatives for the Intelligent Investor (1999); John Bogle on Investing: The First 50 Years (2000); Character Counts: The Creation and Building of The Vanguard Group (2002); Battle for the Soul of Capitalism (2005); and The Little Book of Common Sense Investing (2007). His seventh book, Enough: True Measures of Money, Business, and Life, was published by John Wiley and Sons in November 2008.
Mr. Bogle served as Chairman of the Board of Governors of the Investment Company Institute in 1969-1970, and as a member of the Board in 1969-1974. In 1997, he was appointed by then-U.S. Securities and Exchange Commission Chairman Arthur Levitt to serve on the Independence Standards Board. In 2000, he was named by the Commonwealth’s Chamber of Commerce as Pennsylvania’s Business Leader of the Year.
He served as Chairman of the Board of the National Constitution Center from September 1999 through January 2007, and was a Director of Instinet Corporation until December 2005. He was a member of The Conference Board’s Commission on Public Trust and Private Enterprise, and is a Fellow of the American Philosophical Society, and the American Academy of Arts and Sciences. A Trustee of Blair Academy, he served as Chairman in 1986-2001. He has received honorary doctorate degrees from the University of Delaware, University of Rochester, New School University, Susquehanna University, Eastern University, Widener University, Albright College, Pennsylvania State University, Drexel University, Immaculata University, Princeton University, and Georgetown University.

Mr. Bogle was born in Montclair, New Jersey, on May 8, 1929. He now resides in Bryn Mawr, Pennsylvania, with his wife, Eve. They are the parents of six children and the grandparents of twelve.

Click here to view the video of the Question & Answer session.

To view the photo gallery of the event click here!