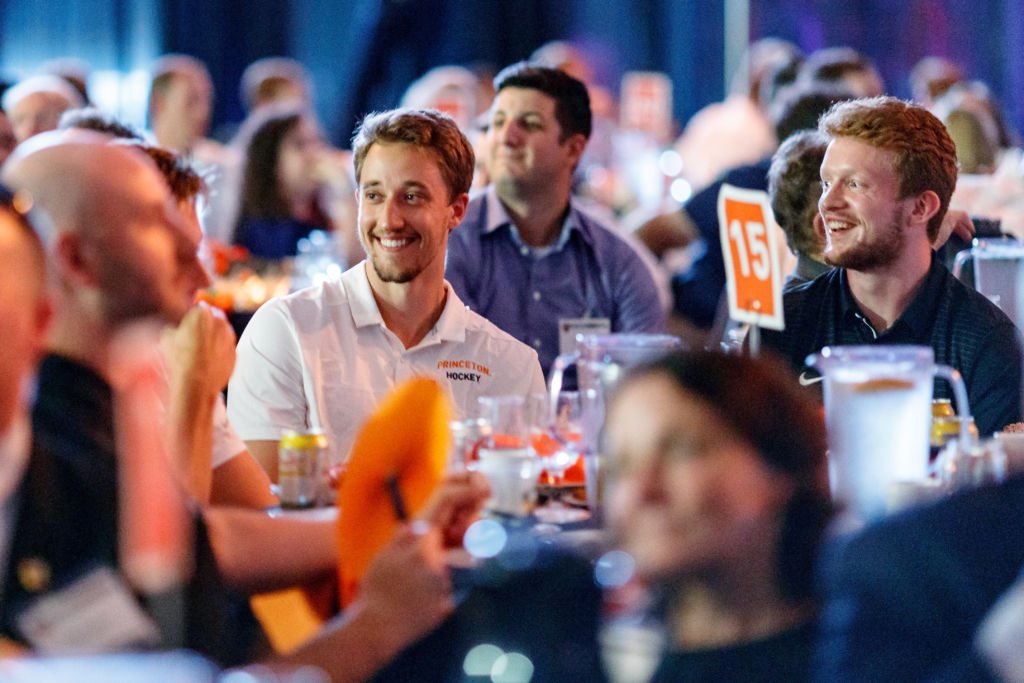 The Princeton Varsity Club and the Department of Athletics held the 22nd edition of the Gary Walters ’67 PVC Awards Banquet on Thursday, May 30th, to celebrate the accomplishments of the Princeton Athletics’ Class of 2019. Held in Jadwin Gymnasium, 600+ attendees comprised of alumni, families, friends, coaches, staff and many others in the Princeton community, came together to celebrate the more than 200 graduating Tiger student-athletes. 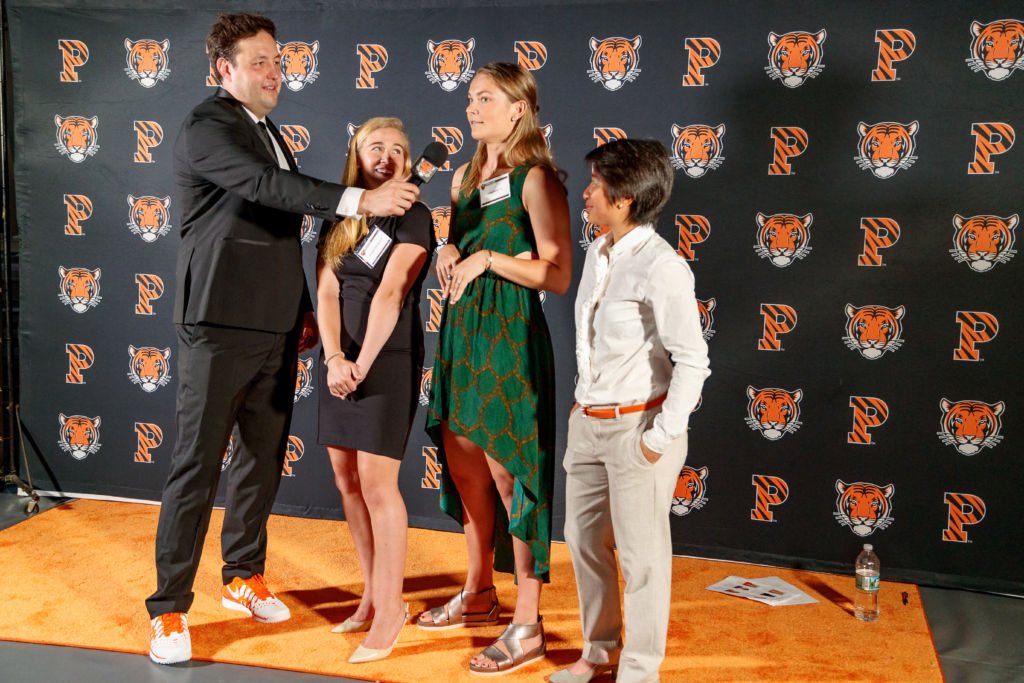 Senior student-athletes, families, friends and distinguished alumni entered the event along the “Orange Carpet” entryway, where they were met by basketball alum and current on-air talent Noah Savage ’08 conducting interviews ranging from anticipation of the evening’s event to reflections on their Princeton student-athlete experience to fashion advice for Reunions weekend.

Ford Family Director of Athletics, Mollie Marcoux Samaan ’91, presented the department’s top student-athlete and alumni awards while speaking to the collective successes of the Princeton Athletics’ Class of 2019, both on and off the field of play.  In addition to the below student-athlete awards, heartfelt and inspiring keynote remarks were provided by Class of 1967 PVC Citizen-Athlete Award recipient Chris Young ’02 (video), as well as Marvin Bressler Award recipient Karen Jezierny (video). 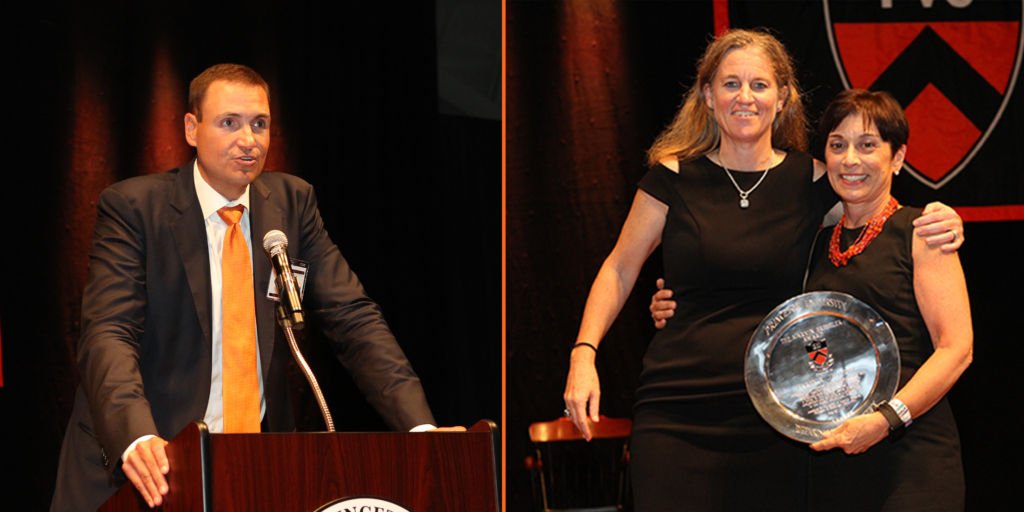 Additional student-athlete and staff awards presented as part of the evening included the following:

Claire Collins is a four-time Ivy League champion from the women’s open first varsity 8.
She is also a two-time All-American and All-Region rower (those honors have not yet been announced for this year).

In 2019, she was a first-team All-American as the Tigers had their best finish (fifth) in six years at the NCAA Championships Grand Final. Collins has rowed with the Varsity Eight in each of her four seasons with Princeton, having lost just three regular season meets, and none as a senior. At the most recent Ivy League championships, she helped Princeton clinch a win by nearly four full seconds.

Collins also participated with the United States at the U-23 World Championships in each of the last three years, picking up a silver medal in 2018. She is an economics major from McLean, Va. 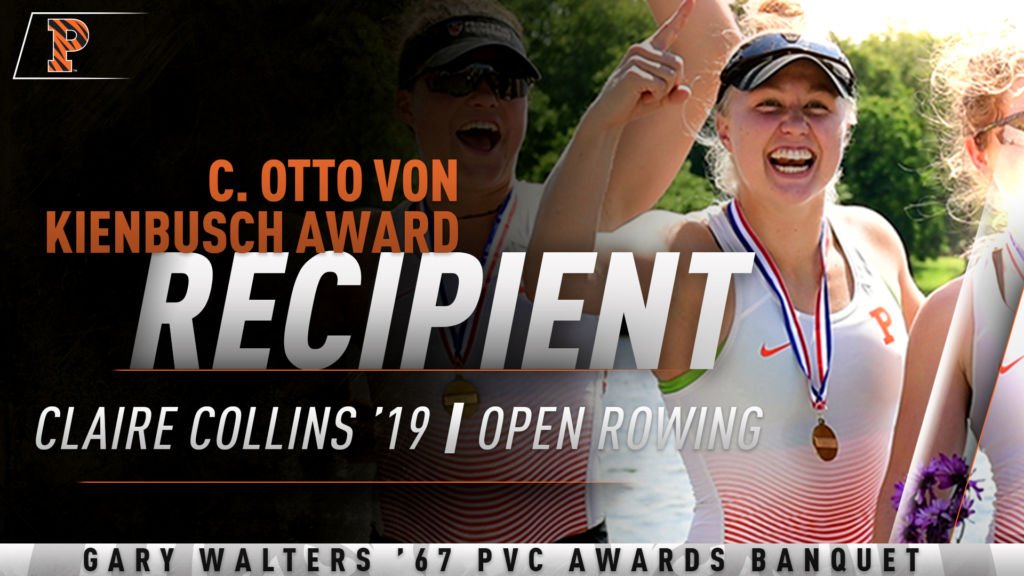 John Lovett, a touchdown-producing machine during his time at Princeton, finished his career as a two-time Bushnell Cup winner as the Ivy League Offensive Player of the Year, in 2016 and then, after missing the 2017 season due to injury, again this past fall. He also became the eighth Princeton football player in the last 100 years to be a two-time first-team All-American and was a three-time first-team All-Ivy League selection.

During his time at Princeton, Lovett scored touchdowns by throwing, rushing and receiving, and he was a nearly unstoppable short yardage force. As a senior, when he was at the controls of the highest scoring offense in Ivy history at 47 points per game, he led the league in total offense (303.0 yards/game) and was second in both rushing (99.3 yards/game) and passing (203.7 yards/game).

His 20.9 points-responsible-for per game ranked fourth in the country, and he led the Ivy League with 18 passing touchdowns while also finishing sixth in the nation in completion percentage (66.1 percent). A history major from Wantagh, N.Y., Lovett signed a free agent contract with the Kansas City Chiefs. 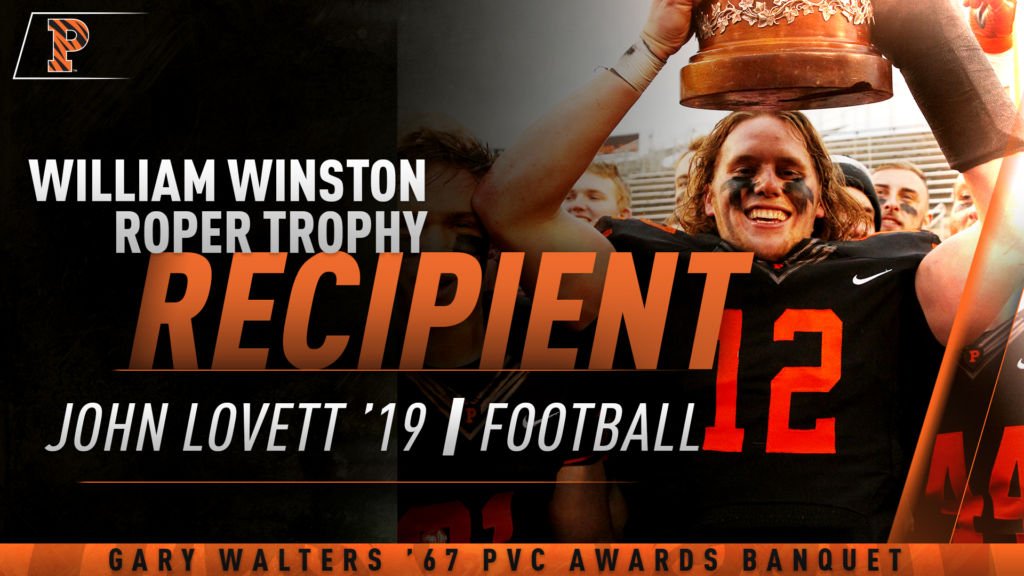 Her senior thesis was titled “The Impact of Acquisitions on Hospital Capacity and Investment,” and in addition to her outstanding work as a rower and student, she was also on the community service inter-club council and a community service chair for Cloister Inn for two years. Barnard is an economics major from Wellesley Hills, Mass. 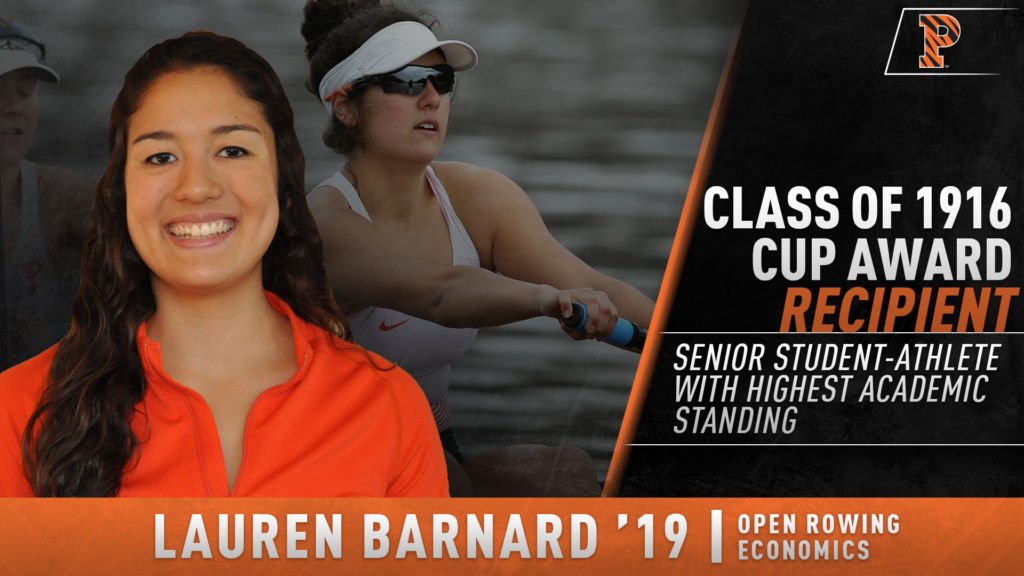 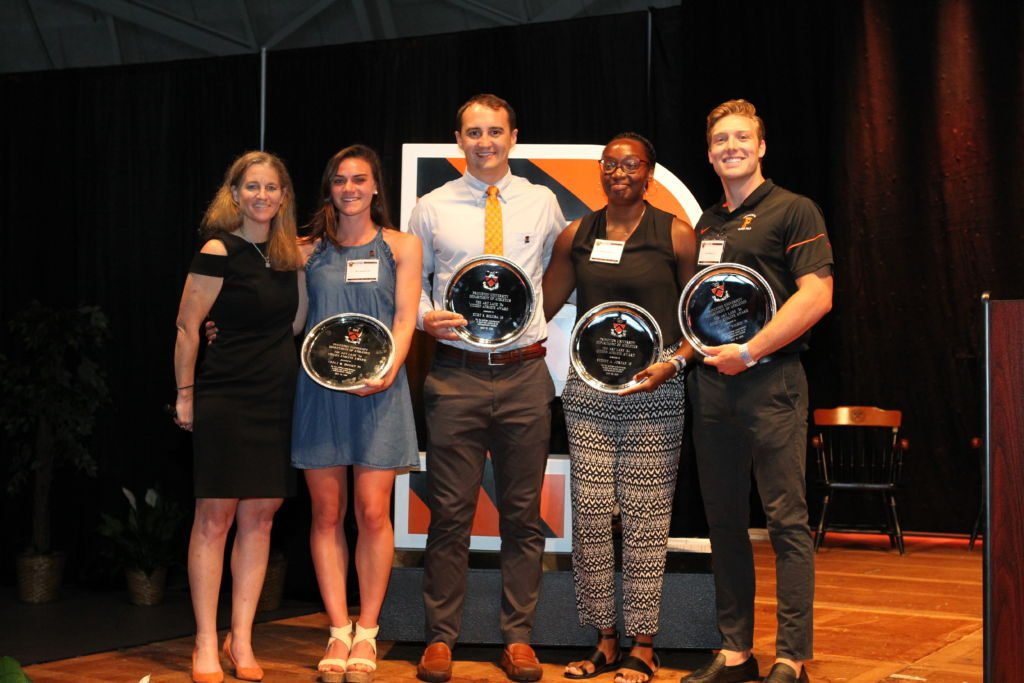 Carly Bonnet, an ecology & evolutionary biology major and two-time captain of the women’s track & field program, dedicated herself to service both on campus and abroad. When not sprinting or hurdling on campus, Bonnet reinvested in her campus community through her roles as an orientation Outdoor Action team leader and secretary of the Class of 2019. She participated in the Princeton Varsity Club-sponsored Coach for College program, where she taught biology, life skills and sports to underprivileged youth in rural Vietnam. Bonnet was an incredible ambassador for Coach for College, encouraging others to step outside their comfort zone and serve those in need. Her leadership, team spirit and commitment to serve prompted her coaching staff to select her to a board leadership role within their Friends of Princeton Track & Field and Cross Country alumni group.

Kurt Holuba, a psychology major and former All-America and Bushnell Cup finalist, suffered his second ACL tear in as many years just days before the 2018 football opener. While injury abruptly ended his playing career and NFL dreams, it did not stop the two-time captain from leading the team to the Ivy League title and first undefeated season in 54 years. Holuba displayed unparalleled resolve and selflessness, becoming the inspirational team leader, a beloved mentor and a true extension of the coaching staff to his peers. Coaches and teammates alike credited his unforgettable team address following his injury as the catalyst to this historic season. Off the field, he served as the chapter president of Uplifting Athletes, raising over $60,000 to fight rare diseases. He also partnered with Powers Promise in the fight against muscular dystrophy, and he participated in service projects in support of the PVC and local nonprofit, Isles, Inc.

Sydney Jordan was a three-year starter and captain of the Ivy League champion women’s basketball team, yet her accomplishments and impact to the community extended well beyond the court. Jordan, a philosophy major, immersed herself in service and leadership opportunities on campus, including serving as the chair of the Diversity and Equity Committee of the Princeton Undergraduate Student Government, a representative on the Community Service Inter-Club Council, a University Chapel deacon and a Student-Athlete Wellness Leader. Last summer, she completed a Princeton Internship in Civic Service at LIFT, a national nonprofit that empowers parents and caregivers to break the cycle of intergenerational poverty. Earlier this year, Jordan was recognized as a National Rhodes Scholar finalist in addition to being Princeton’s first female student-athlete to receive the University’s prestigious Moses Taylor Pyne Prize.

Ryan Wilson, a two-time league champion and the all-time assist leader for Princeton men’s water polo team, epitomized the values of achieve, serve and lead both in the pool and in his community. An economics major, Wilson was an instrumental leader for the Varsity Student-Athlete Advisory Committee (VSAAC) and the Student Athlete Service Council (SASC), serving as president of both organizations this year. For VSAAC, Wilson helped lead efforts around the “All Stripes One Streak” initiative focused on campus inclusivity, as well as this year’s campaign, “No Tiger Too Tough,” to eliminate the stigma and encourage awareness around mental health. In his role with SASC, Wilson has partnered with local school and organizations such as HomeFront and Habitat for Humanity to provide service opportunities for Princeton student-athletes across all varsity teams.

Lorin Maurer h78 Award
Awarded to that member of the Princeton Athletics family who best reflects the passion, dedication and infectious enthusiasm that defined Lorin Maurer’s character and her inspiring impact on colleagues and friends.
2019 recipient – Greg Paczkowski (Associate Director of Athletics/Facilities)

We wish all 2019 graduating student-athletes the best of luck in their future endeavors!